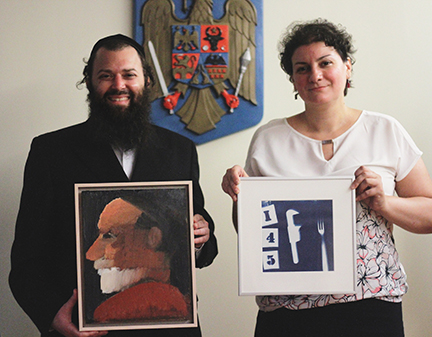 An artist and former Key Clubber raises Holocaust awareness one person at a time.

Growing up in California, Joseph Sherman had always been interested in service. He volunteered for a variety of projects as a tween, and when he started high school, a teacher recommended he join Key Club.

“It was the first time that I had a group of friends that were all into service,” Sherman recalls. “And I also especially liked that it was not a religious organization. It was the very fundamentally, universally human idea to make the world a better place.”

Little did he know, however, that the Key Club experience would lead him to one day develop a service program with worldwide impact.

In 2015, Sherman, an artist and marketing specialist now living in Israel, established The Holocaust Art Institute, a diverse group of artists and other professionals who raise public awareness of the Holocaust and its heroes. Institute members visit embassies, cultural organizations and museums to present Sherman’s paintings, which are inspired by those who saved Jewish lives during World War II. Other paintings and photographs are shared as well.

“It has been over 70 years since the Holocaust, and the heroes that I paint about have usually been memorialized in different ways,” Sherman says. “But to keep the lessons of their legacies relevant in the hearts and minds of the next generation, new forms of engagement must be created. This is a big project, but it comes down to making an impact one person at a time.”

He has met diplomats and government ministers from a wide range of countries, including Latvia, Malta, Croatia, France, Germany, Belgium, Romania, Russia, India, Kenya, Hungary, Greece and Serbia. Speaking to so many high-ranking individuals could have been daunting, but lessons he learned in Key Club proved invaluable.

Key Club also taught him to build connections and plan for the future, skills that he’s used to broaden the Institute’s depth and reach. The Institute includes executive directors of organizations, university professors and other key sources.

“At first (in Key Club), I was surprised to learn that one of my main jobs as the club president was to develop leaders who would continue the club,” he says. “I had a similar experience as an artist presenting paintings. I realized that if I want to truly have a global impact, I need to develop a network of people who embrace the cause. These are people who are very successful in their own right. As much as I teach these esteemed representatives about interacting with dignitaries, I learn a lot from them. Together, we build bridges of hope.”

One thought on “Painting by numbers”