For more than 35 years, Florida Kiwanians have helped thousands of migrant workers and their families enjoy the holidays.

Shortly before the Christmas holiday, families have descended on Orlando, Florida, ready to bask in the sun and tour the state’s famous theme parks. Attraction lines stretch far beyond each entrance, filled with impatient children and disgruntled parents tired of hearing “How much longer until we get to the front?”

Three hours to the southwest, children and parents also wait in a lengthy line snaking slowly through a park. But the tenor of this queue is markedly different. There is no impatience here, no complaining about wait time or thumbs flying across mobile phone screens. The families traveled to the park by foot and, unlike their Orlando counterparts, didn’t hand over more than US$100 per person to enter. They are here for Christmas in Immokalee, an annual event sponsored by the Northside Naples Kiwanis Club. 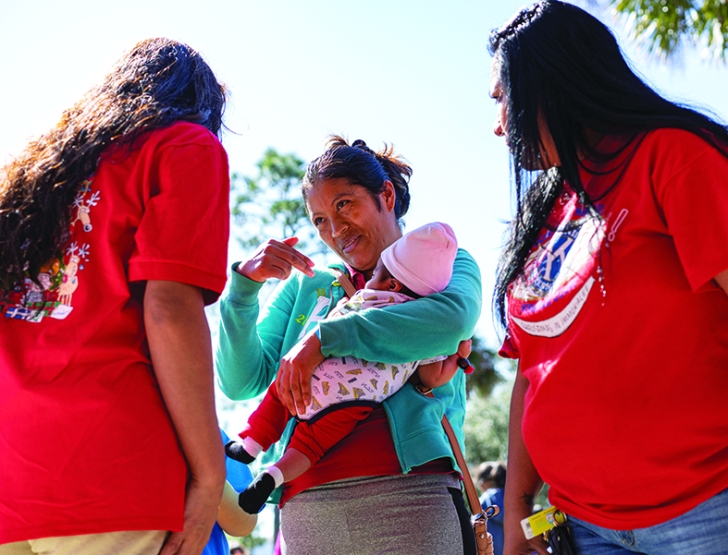 Immokalee is an unincorporated area just under an hour’s drive north of Naples, a Florida city “Forbes” magazine called one of the “top 25 places to retire rich.” Collier County, home to both Immokalee and Naples, is the wealthiest county in Florida, with a per capita personal income of $87,829, as reported by The Palm Beach Post.

But you won’t find those rich retirees living in Immokalee. This heavily agricultural area produces an abundance of vegetables and fruits and is one of the major suppliers of tomatoes in the United States. And those tomatoes, peppers, oranges, strawberries and other bounty would not make it to supermarkets and restaurants without Immokalee’s residents.

The families gathered in the park are migrant workers and their children. Many are from Mexico or Haiti; all want a better life for their families and are willing to work long days in the hot sun to find it. Tomato pickers, for example, generally work 10 to 12 hours in the fields each day. They handpick the vegetables, dropping them into 32-pound buckets that they then prop on their shoulders and cart 100 feet or more to a transport truck. They toss the tomatoes into the truck and quickly return to the fields.

The workers must move rapidly if they hope to make money. Harvesters are paid by the piece. At today’s rate, every filled 32-pound barrel earns 51 cents. That means one person must pick nearly 2.5 tons of tomatoes daily to earn minimum wage, according to the Coalition of Immokalee Workers, a human rights organization.

Not surprisingly, then, more than 43 percent of Immokalee’s population lives below the poverty level. And many of those families eagerly anticipate Christmas in Immokalee, which draws thousands each year. 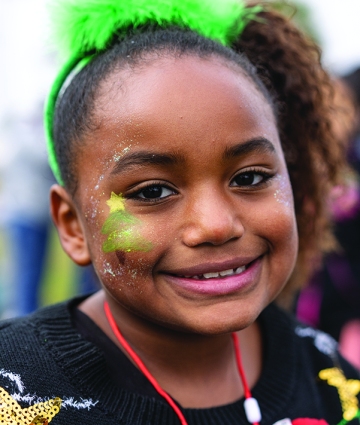 That long line they’re so patiently waiting in? When they reach the front, children get to meet Santa and Mrs. Claus and pose for a photo. And then, the most magical moment of all: The families enter a space lined by shelves overflowing with brand-new toys. Tonka trucks. Dolls. Dollhouses. Bowling sets. Beauty kits. Ukuleles. Basketballs. Footballs (of both American and soccer varieties). Skateboards.

There is no rushing, no pushing, no greedy grabbing of treasures. Families move calmly through the space as children carefully consider the choices. Each child gets to select a toy to take home, and the decision is a momentous one. Most likely, it will be the only material gift they receive this holiday season.

Kiwanian Pat Milford has been Christmas in Immokalee’s “toy lady” for more than 30 years, almost as long as the event’s 35-plus-year history. At first, the Kiwanis club sought out gently used toys and distributed them to as many children as possible. But many of the donations received were far past the gently used stage, and she wanted more for Immokalee’s kids.

“Our concept was these people are our guests,” Milford explains. “They are to be treated like they’re in your home — that’s the only way to treat them.”

So the club raised funds, and Milford began buying new toys. Today, she orders 1,000 toys from an Orlando wholesaler to ensure that children of any age can find the perfect present.

“To see some of these kids,” she says. “You’ll see a little, short guy with this big ol’ truck or a big ol’ basketball, and the smile is from ear to ear and his eyes are shining. You just go, ‘Oh my, what a wonderful thing to be doing.’”

Fellow Kiwanian and longtime Christmas in Immokalee volunteer Jeanette Igoe plays a key role in organizing the annual event. During the gently-used-toy days, she carted home boxes of donations to spruce up for the young guests.

“I’d wash stuffed animals in the washing machine, and they would be fresh and clean, then I’d fluff them up. Dolls would get their hair brushed. New ribbons put in. Everything we selected was refurbished before giving to the children. But you can only do so many stuffed animals a year. Now, everything’s brand new, out of the elegant boxes.”

But the club doesn’t stop at Santa visits and toy shopping. It also provides a meal for the families — a tradition much appreciated by parents, who often have no money to spare for a big holiday meal. Some years it featured chicken cooked on 12-foot-long grills staffed by Kiwanians. Last year, the nonprofit Meals of Hope provided a spread that included taquitos, tacos, refried beans, fruit salad and cups of lemonade, all served in foam containers by volunteers. (At the event’s conclusion, Igoe walked through the crowd, passing out plastic grocery bags so the guests could load up on extra food to take home.)

With parents, grandparents and children all eager for a meal, the food line can stretch well beyond the kitchen area.

“There will be hundreds of (guests) waiting,” Milford says. “You see three or four people in our Publix supermarket line, and they’re already getting antsy. And (the Immokalee guests) are just waiting there so nicely and patiently.”

Until 2018, the event was held on Christmas Day, so volunteers often spent more time with Immokalee’s families than they did with their own on the holiday. For about 15 years, Rita Easterbrook was one of them. It’s an event she wouldn’t miss, because she also attended as a child — when she was one of those valued guests.

“That was the one time where I got to see my parents actually smiling, laughing, having a good time,” she recalls. “My parents were migrant workers, so there wasn’t a whole lot of smiling throughout the year. It was a lot of working very early hours, late nights. And so when we came here, it was very joyful. It was very memorable. They were dancing and laughing, having a good time. My mother was throwing her head back. I can still feel it every time I talk about it.”

Returning to Christmas in Immokalee each year as an adult volunteer became a tradition not only for Easterbrook, but for her husband and their three children.

“They say they don’t know what else to do on Christmas Day,” she says, smiling.

Last year, Easterbrook’s children, now young adults, had to work at their jobs and couldn’t attend, but Rita’s sister and brother and their respective kids filled in the gap. Key Club members pitched in as well, packing food, replenishing toy shelves, painting young faces and nails and handing out bags of candy.

Chris Zuccarello, immediate past vice president of the Gulf Coast High School Key Club in Naples, attended the event for the sixth consecutive year in 2018. He sees some of the same children each year, always asking them about their lives, schools and activities. He’s encouraged them to work hard at their studies and reach for a higher education and is thrilled when they later tell him their plans to attend University of Central Florida or Florida State University. He knows what encouragement from an older teen can mean in their lives. 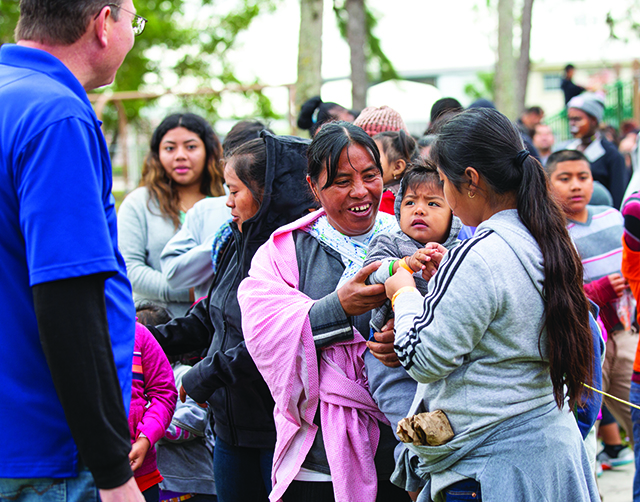 “When I was about the age of these children, I was actually going through a similar situation,” he says. “And now that I’m out of that situation, it’s really humbled me and made me really think about how privileged I am, as well as what I can do to better help the community. … Each year, we ask about how they’re doing, what are their grades now. And each year, they respond, ‘I’m doing better. I’m always trying.’ And that’s what really counts, as long as those kids thrive.”

When the Kiwanians switched the event from Christmas Day to the preceding Saturday, they were concerned that the date change might bring fewer families. Plenty of people still showed up. Noticeably absent, however, were the men. On Christmas Day, the fields are closed. But a regular Saturday is a workday.

Crowd levels already had dropped previously from the years when 4,000 guests gathered in the park to celebrate. The United States has taken a more aggressive stance on its immigration policies. Agents from Immigrations and Customs Enforcement, a federal law enforcement agency, have been ramping up arrests for violating policies, and undocumented workers and their families fear separation and deportation.

“People are afraid to come out of fear that ICE will arrive and bring them in,” Igoe says. “They’re scared. A lot of them are scared.”

But as long as any Immokalee residents are willing to attend, the Northside Naples Kiwanis Club plans to be there for them.

“Somebody asked me, ‘Why do you do it?’ I said, ‘You have to see the children,’” says Igoe. “’You would understand if you could see the happiness it brings those kids.’ You get into the mode, you know? And you can’t do enough for those kids.”

Adds Easterbrook, “The smiles the children have when they pick out their toys. As a child, I couldn’t see my own face. So now I get to see their faces, and they just light up when they find a toy they love. And that’s my Christmas now.”

Click  to watch a video about Christmas in Immokalee.