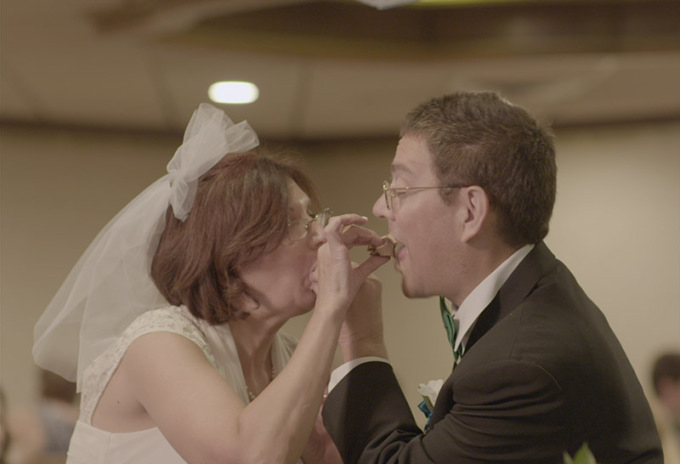 A Pennsylvania Aktion Club member is the star of an award-winning documentary.

Dina Buno will tell you she’s sassy. She has opinions she isn’t afraid to tell you either. She is talkative, which is obvious as she launches into the story of her life. But she’s also a study in contrasts.

As the star of the award-winning documentary “Dina,” which also features her now-husband Scott Levin, she shows another side — often overly cautious, a tad nervous and quick to admit she needs some extra loving care and, sometimes, a little bit of help.

In other words, she’s exactly like every one of us.

And she has a long Kiwanis story. 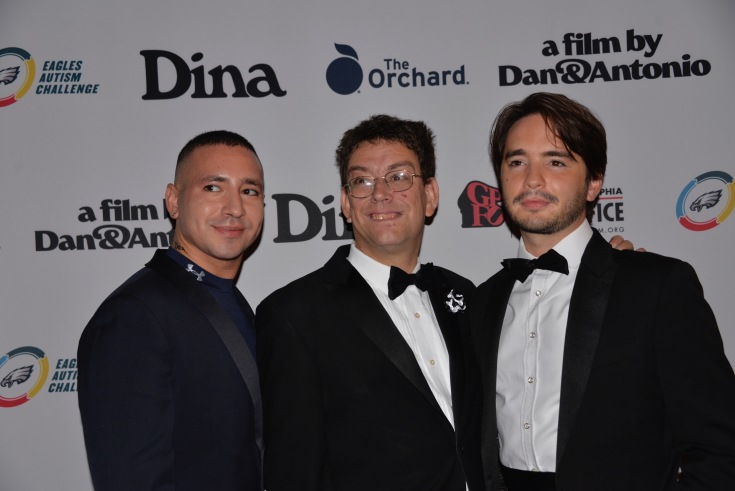 Dina met Ed Sickles, a member of the Kiwanis Club of Glenside, Pennsylvania, when she was a student and he was her teacher. He became her mentor. Her friend. And when he and fellow Kiwanis member Darlene Anderson started the Abington Aktion Club, a service club for adults with disabilities in the Philadelphia area, Ed invited Dina to join.

Dina says Ed was always there for her, offering life lessons, friendship and advice. She recalls the time, decades ago, that she came home crying about a job she had and hated, and how Ed had a suggestion for her.

“Ed said, ‘Why don’t you quit this job and work for me and take care of my son,’” Dina says. “The rest is history.”

Dina says she watched Ed’s son, Dan, “grow up into a wonderful child, teen and young man” and that they’ve “been friends ever since.”

That same Dan Sickles also grew up to become a filmmaker — and he would put his friend Dina’s name in lights.

“I knew Dan would be destined for great things,” Dina says. “I knew this young man was going places.”

Where she might not have guessed he’d end up going is right where the two of them find themselves today: together in the spotlight and on red carpets around the world. “Dina” the movie has won several major film awards, including the Grand Jury Prize at the Sundance Film Festival, the Peek Award and the International Documentary Association’s award for top feature of 2017.

“I’m ecstatic,” she says. “I’m so excited. I’m also thrilled for the people who made it.”

Director Dan Sickles says he and fellow director Antonio Santini set out to make a film honoring Ed, who passed away in 2014. They wanted to show Ed’s life through the eyes of the Aktion Club members. So Dan and Antonio visited the Aktion Club to gather footage. And Dina stole the show.

Now they had their storyline. They would follow Dina and Scott as they lived out their lives as what they call a “neurodiverse” couple. (Dina is developmentally disabled, autistic, has Asperger’s syndrome, anxiety issues and obsessive-compulsive disorder. Scott also has Asperger’s.) They’d focus on Dina and Scott and how they navigate their days. We see their friends, most of them members of the Abington Aktion Club, plan an engagement party for the couple. We see their wedding and Scott moving into Dina’s apartment. We see Scott go to work and Dina keep up with their home. The audience gets drawn into this unique view on life, cameras seemingly hidden from view yet capturing everything from the couple cooking together to intimate discussions about sex. It’s real and it’s raw. 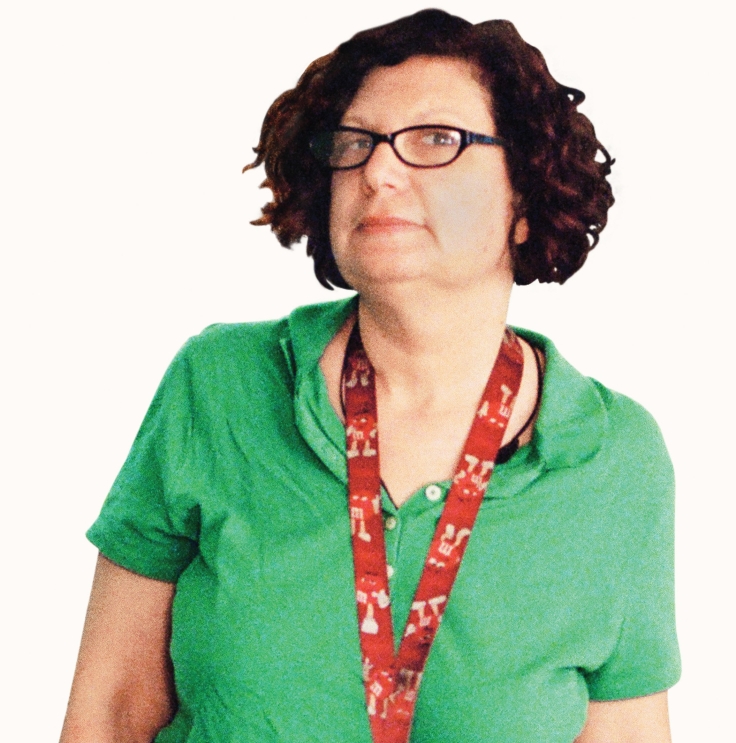 Maybe most importantly, “Dina” forces viewers to think about how we treat one another and how well we communicate our needs and desires. It reminds us that no matter how different we are, we’re all the same. And it makes us think about the community we surround ourselves with, and how our relationships shape and change us.

“Sometimes on a cold snowy night on a Tuesday when you’re making peanut butter and jelly sandwiches and you have a cold and your joints are aching, but you go and you do it anyways because you’re helping other people. Ed taught me all of that. I want to be like Ed.”

Dina says Dan has a lot of qualities found in his late father.

“Even in his teen years, Dan knew how to give,” she says. “Dan taught me the meaning of giving but he also taught me how to be strong and make peace with the void after Ed was gone. Dan is a reminder that Ed is still in my heart and there is still a Sickles there. Dan let me follow my dreams and he said to me, ‘I’ve been rooting for you.’ And he just kept cheering me on.”

And he’s still cheering her on. As director, he gave her space and allowed her story to shine.

“This was Dina’s stage,” he says. “We didn’t script anything. We just let it go.”

On Aktion Club
“It has changed my life. I became a leader, and that’s the most important thing. I want to show my leadership skills, and it makes me feel good that I show up. Being part of a community like this, sometimes you get frustrated when things are hard, but it’s about teamwork and it’s about loving your fellow members no matter what happens. I’ve made so many friends through Aktion Club, from all over the world. I plan on being in Aktion Club forever. This is my family.”
Dina Buno

“The importance of Kiwanis and Aktion Club is evident as soon as you spend time at a club meeting or spend time with the members. As far as I’m concerned, when both my parents died, I found myself going to the Aktion Club for me. I knew they were also going to miss my dad and that he had left a big void in their lives. I would go to the meetings because I knew this was a group of people that is really good at paying attention to each other’s needs in any given moment and the second I showed up, they knew what I needed. And they’ve been consistent. They’re the only group of people who I know that consistently remembers my birthday. Every single year, I get a video from the Aktion Club from their meeting, singing ‘Happy Birthday.’ ”
Dan Sickles

On being part of “Dina”
“I think both Dan and Antonio and the whole crew are just special people. The cameramen and the editor, every single person who worked on this film came with an open heart filled with love and adopted all of the Aktion Club members. They took us under their wing and really treated everyone with respect.”
Darlene Anderson

“I’m not the star. Dina is.”
Scott Levin

On lasting impressions
“I want people to see that it’s nice to have your independence when you’re different. It’s nice to have a partner and get married. The movie shows that people with learning disabilities or special needs can work and they can volunteer and they can get married. That’s what I want people to see, that you know people who are different. Scott’s more quiet and regimented, and I’m more sassy and spunky, but two people who are very different can also love each other. You can come away from the movie that we’re just like everybody else. We have wants and needs. We want to love. That’s it.”
Dina Buno

“This movie is about all of us. It shows how we negotiate with the people we love and how to love each other better. It shows how we wrestle with this and how we navigate it together. And it’s not just about marriage. It’s about friendship.”
Dan Sickles

On their proudest moments
“I’m most excited watching from the sidelines with Dina and Scott and Darlene being around … sort of coming into these spaces where people are interested to talk to them and get to know them. And for Scott and Dina, it’s given them respect and dignity and real space that they aren’t usually lent. People are asking for photos with them and asking for autographs. The film is really about establishing connections, so to see that in real time is everything.” Dan Sickles

“For me, I think, like a lot of people, I grew up always hiding my eccentricities. I had a photo project and I brought it to school and I was scared of people seeing it. My friends wanted me to show them, and I remember it being so hard to show that layer of myself. It was so hard to express myself. Meeting Dina and Scott and the club members, having Darlene in my life, all of that kind of gave me a new space to feel welcome in. The first time we went to the Aktion Club, the way that everyone was so open to us so instantly, I thought, OK, I can never walk into a room where everyone is this genuinely interested in getting to know me and welcome me. It was such an open, free space.”
Antonio Santini