Arkansas kids and Kiwanians huddle up to focus on goals, teamwork and the game of life.

Story and photography by Kasey Jackson

The heat is on at Springdale High School’s Bulldog Stadium, and it’s not just because the temperature hovers around 85 degrees. It’s August, and in Springdale, Arkansas, football season has begun. In this town of about 67,000, where most people work at Tyson Foods or Wal-mart—both with headquarters here—it’s hard not to find sports fanatics everywhere you turn. In this Arkansas Razorback neck of the woods, the pigskin rules as the ball of choice. And Kiwanis Kids’ Day Football is where many of Springdale’s youngsters suit up for their first gridiron experience.

Scott Blackwell talks football and Kiwanis over lunch, laughing with other coaches and Kiwanis members. Blackwell, 2008–09 Springdale Kiwanis Club president, sees firsthand what Kiwanis football means to this community and the club’s future.

“Youth sports is big in Springdale,” says Blackwell, who coached his son through the entire Kids’ Day Football program. “This program puts Kiwanis center stage in Springdale. We’ve actually recruited people into our club right at the gate.”

Two conversations crisscross the table. Kids’ Day Football program director Bryan Clinkscales’ voice rises in excitement about his team’s chances for making it to the championship game. Meanwhile, Blackwell talks to coach Sam Hannon about the Kiwanis club’s role in Kids’ Day Football. Hannon is impressed by the Kiwanians’ commitment to the program.

“As a parent, the thing that’s great is the amount of time these guys put into this,” says Hannon, coach of the fifth- and sixth-grade Blue Team. “The other night, I asked what everyone was doing after the game, and Bryan (Clinkscales) was going to clean the stands. They all work so hard.”

But to Hannon, it’s more than the intensity of their work.. “Seeing the dads and kids on the field together …” he says, trailing off. “We’re creating memories here. And these guys make it happen.”

It’s almost 8 p.m. and fans fill the bleachers, gulping ice-cold drinks to fight back the heat. The announcer calls plays for the first and second-grade championship game. On the sidelines, sweaty players fight for a cool spot in front of a sideline fan while cheerleaders belt out their best chants.

In the end zone, the third- and fourth-grade Gray Team lines up. Their game is about to start. From the looks on their helmet-gridded faces, they mean business. “You don’t know what this means to me,” says No. 80 Hayden Holt. “This is my first championship game.”

To Hayden and hundreds of players, cheerleaders, parents and family members, Kiwanis Kids’ Day Football is more than a day. It’s an exciting few weeks of practice, getting equipment and a jersey, meeting friends and having a great time—all packaged in a program that coaches kids in sportsmanship, teamwork and character development. To Kiwanians who have been staging Kids’ Day Football for 56 years, it’s a busy week that pays off in countless ways.

This is the group’s biggest fundraiser, bringing in up to $20,000 each year. These funds allow every child who plays or cheers for the Kids’ Day Football games to do so for free. But it also helps pay for a slew of other projects, Reading Is Fundamental and activities with the club’s Service Leadership Programs.

“It is very important to keep this program free for all children,” says Clinkscales, who, in addition to being a Springdale Kiwanis member, coaches the fifth- and sixth-grade Red Team. “We want to reach the kids who can’t afford to play other sports and give them the same opportunities as those who can.” 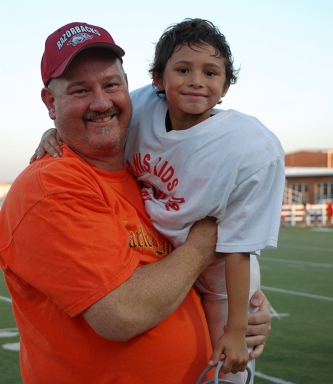 Kiwanis members are active in every aspect of Kids’ Day Football— from conception to coaching to concessions. To them, this is more than just a few days of football games. This is a chance to interact with kids. Mentor them. Teach them a thing or two about the game—and life.

“Our program is designed to teach these children to work together  toward a common goal, not just about football,” Clinkscales says. “We try to encourage and build up their self esteem.”

Inside the concession stand, Springdale Kiwanians feverishly work side-by-side with Key Club members and other volunteers to keep up with sales. It’s another hot day, and it’s hard to keep enough cold drinks at the ready.

Joanna Williams, a past club president, shares one of her many Kiwanis moments.“This family came to register,” she recalls. “The dad came in followed by the mom. And behind them was this little boy, about 7 years old.”

The little boy, Williams recalls, clearly was not happy to be signing up for football. But then …

“His dad helped him try on his helmet and pads. All of a sudden, the boy puffed out his chest, grinned and said, ‘I’m a football player!’”

The boy puffed out his chest, grinned and said, “I’m a football player!”

The memory sticks in her head for what it was: A moment when a timid little boy realized his potential. She equates it to Superman putting on his cape for the first time.

Back on the field, the sun has gone down, and it’s time for the final game of the season. It’s the fifth- and sixth-grade championship game. Red vs. Blue.

As director of Kids’ Day Football, Bryan Clinkscales is programmed to say only positive things about all the teams, but he’s also a coach and passionate about his team. And while he’s hopeful, he also has to admit he wasn’t sure how the season would turn out. But here they are, in the championship game.

The excitement is palpable. They were underdogs in their first game, but they pulled it off. Now they’re up against the Blue Team, which the day before had beaten their opponent by more than 20 points.

Down by six points and 40 yards from the end zone, the Red Team’s hopes of an upset victory wane in the final seconds of the championship game. JJ Rainey calls for a quarterback sneak. As he breaks through the line, he finds the middle of the field wide open. With 21 players in pursuit—10 of them cheering and 11 intent on a game-saving tackle— Rainey reaches the 30, the 20, 10, 5 and touchdown! The game is tied.

As his offense lines up in shotgun formation for a two-point conversion, he’s not confident in the pass play. He calls out adjustments to his team. The center hikes the ball. Rainey steps back to throw. Suddenly, he pulls the ball down and bulls forward. A draw.

“Every now and then I run into someone I have coached in the past and they still remember the fun they had playing in Kids’ Day Football.”

Will his linesmen open a path? Will Blue linebackers close the gaps? More importantly, what will the kids learn about winning and losing? “The reason I love to coach is to help kids gain confidence in themselves,” Clinkscales says. “You can’t help but feel excited for these kids as they accomplish one goal after another. And the pay I receive is the best: a huge smile on a child’s face after a touchdown, a great block or a game-saving tackle. Nothing can beat that look of joy and happiness. Every now and then I run into someone I coached in the past, and they still remember the fun they had playing in Kids’ Day Football.”

By the end of the night, Clinkscales has cheered so hard his voice is almost completely gone. But it was worth it.

The underdogs have done it again.

This story originally appeared in the December 2009 issue of Kiwanis magazine.