When she was 4 years old, Maggie Morrison walked into the elegant Brantford, Ontario, home of piano instructor Virginia Blaha and introduced herself with the declaration, “Hello. My name is Maggie Morrison, and I can do a somersault.”

Now she can also play piano.

Jonathan Elliotson started piano lessons when he was 3 years old, but there was no escaping his brass heritage. “I’m the last of five kids,” Elliotson explains. “The joke in our family was that piano was mandatory but trumpet was compulsory.” Mom, Dad, siblings: They all play trumpet.

Morrison and Elliotson are two of the thousands of children and adults who have participated in the Toronto, Ontario, Kiwanis Music Festival over the past 72 years—more than 30,000 competitors this past March alone. Add to that number the students who pass through other Kiwanis-supported competitions from Vancouver, British Columbia, to St. John’s, Newfoundland, and you’ll begin to understand the enormous influence Kiwanis has on Canada’s musical community. Gordon Lightfoot, Sarah McLachlan, Glenn Gould, Justin Bieber and every member of The Barenaked Ladies have performed on Kiwanis stages.

As have Maggie Morrison and Jon Elliotson.

How did you learn about the Kiwanis Music Festival?

I played a lot in Toronto festivals, because that was where I was raised, and everybody—everybody—there talked about Kiwanis. … I ended up going the whole way, and it was a really, really great experience.

What were the nationals like? A lot of pressure?

It was really self-sourced. I put a lot of it on myself. On the flip side, everybody there was super, super nice and really friendly. When we weren’t practicing or competing we were just hanging out. That was one of my favorite parts about going to nationals.

Oh, man. Like music is such a collaborative art, and it doesn’t necessarily mean on the stage, either. I’m at the Glenn Gould School right now, and one of the coolest things is that the four of us trumpet players always hang out together. We’re playing duets. We’re playing quartets. We’re going out for burritos together or grabbing a drink after a concert. We’re always hanging out together.

There’s nothing better than getting on stage with some of your friends and playing some music. It’s fun to compete against each other because you get better that way. But when you get to perform on stage together, it’s just very, very special.

The festivals give students a reason to work toward something. So in lessons and in preparation, you prepare for that performance. And it’s important to hear what other people are doing. It’s important to be involved in the community and have a high level of standard.

What was it like to be an adjudicator at this year’s festival?

Oh, my gosh, I can’t even tell you. This year, one of the students presented “Dresden’s China Figures.” I suddenly remembered playing it with my first teacher, and it was the first piece that I truly loved. And the student performed it just so incredibly beautifully. I just had a surreal moment and was overcome with emotion, because that teacher (Virginia Blaha) passed away this past August. It made me realize how incredibly dedicated all of these teachers are and where they can take you on that musical journey.

What encouragement do you give to children who are interested in music?

I tell them to keep going. Never let anything get you down. Grit and determination and continuing is the number-one way to find success. There’s always beauty in the music. Always strive to find those moments. Just keep going. You’ll get there if you want to.

What are your responsibilities as a volunteer at the Kiwanis music festival?

I work five days of the music festival, selling tickets, moving chairs and music stands. I’m also on site throughout the five days of the dance festival, where I emcee, track marks, keep adjudicators on track and anything else that needs done.

Why do you volunteer?

I strongly believe in the values the young competitors gain from participating in the festival. They work hard as individuals, practicing and showing up on time for rehearsals and performances and working together as a team to become a better group and a better individual. The information they acquire from the adjudicators and from listening to each other provides useful life lessons for the students as musicians and as people.

Describe one of your favorite festival memories.

We had a trio of young men who did a fabulous tap number at this year’s dance festival. They came running and sliding onto the stage. One of them slid so fast and far he ended up on the ground. Trust me, he quickly popped up to get into the routine. They were amazing and received a Platinum 94 for the piece. The look on his face when he heard the mark—he obviously thought the fall had ruined the piece—was absolutely priceless.

Photos below by Michelle Gibson 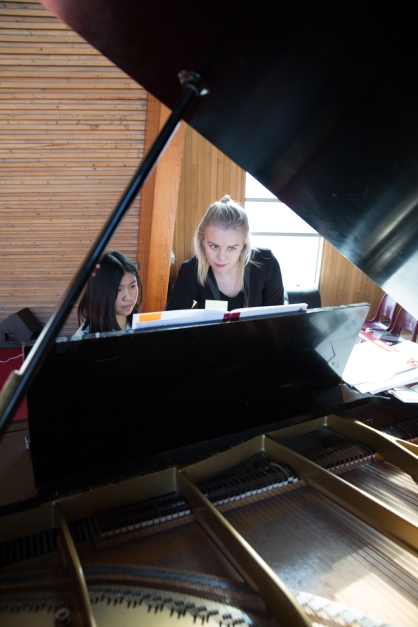 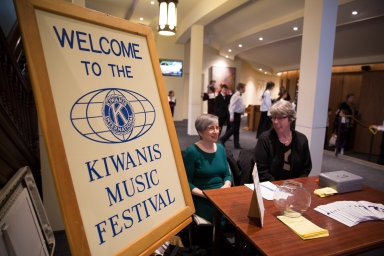 This story originally appeared in the June/July 2016 issue of Kiwanis magazine.