Canadian astronaut Chris Hadfield has commanded the ISS and walked in space. He’s also great with a guitar.

Chris Hadfield knew at the age of 9 that he wanted to be an astronaut. It happened, as it did with many of you reading this article, on July 20, 1969, when Neil Armstrong stepped out of the lunar module and planted his boots onto the moon. So many children—and adults—decided that day, as they watched on their tiny black-and-white televisions, that they wanted to be space explorers. They wanted to be astronauts. But there’s one huge difference with Hadfield’s story: He made it happen.

Along the way, he met goal after goal. He became an engineer. A pilot. An astronaut. A colonel. A commander.

But he also became a hero and friend to millions around the world, who knew him not only because of these accomplishments, but because he made it his mission to stay connected to those of us back on Earth. We followed him on Twitter. Students and everyday folks watched his fun science experiments from the International Space Station, where we learned how he brushed his teeth in space and what it’s like to cut your fingernails in zero gravity. We liked his stunning photos of deserts and rivers on Instagram. We sang along as he performed David Bowie’s “Space Oddity” while floating on the ISS—in a video posted to YouTube. There’s a reason he’s called “the most famous astronaut since Neil Armstrong”—he made space exciting and accessible. 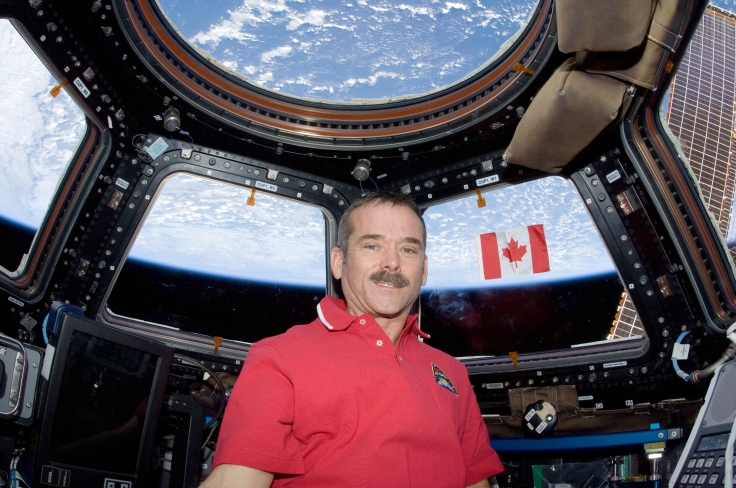 Colonel Chris Hadfield will be the featured speaker during the Opening Session of the 2016 Kiwanis International convention in Toronto. Kiwanis magazine spoke with Hadfield about space, music and future projects—and what’s hanging in his closet. Here’s a bit of what we learned during that interview.

Kiwanis magazine: Is there anything you haven’t had the opportunity to learn yet that you’d like to?

Chris Hadfield: Oh, yeah. Almost everything. The world is immensely complex. I’ve been fascinated with all kinds of other things. I wish I had time to be more of a geologist and archaeologist. I’m fascinated with the history of how we came to be, both from a planetary point of view and from a species point of view. I’m interested in languages. You learn so much about history and culture and people when you learn the language. And I wish I were a better musician. I play a fair bit and I get to play with symphonies, but I’d love to learn to pick guitar a bit better.

But I’m not dissatisfied. The beauty of it is all that stuff is possible and the decision is up to me. I’m not a person who’s resting on his laurels at all.

Speaking of music, is there one song you wish you’d written?

A friend of mine, Ed Robertson, who’s the lead for The Barenaked Ladies, he wrote the theme song for Big Bang Theory, and he wrote it in a half hour in the shower one day. And I was thinking, that’s a cute little tune. I also would’ve loved to have written some of the big, iconic orchestral pieces that we define ourselves with: “The William Tell Overture,” “The Planets,” by Gustav Holst. And then in popular music, there are so many songs that are iconic for us. “If You Could Read My Mind” to me is just a beautiful song. So almost every popular song I wish I had been capable of writing. But I’m also very happy with the songs that I have written and the popular success they have had and how well the album (“Space Sessions: Songs From a Tin Can”) is doing. I wonder at the artistic capability of others more than actually feel envious of it. I feel grateful for it. None of us is the best at anything in the world or the worst. We’re all somewhere in the middle. So I would say I don’t wish I had written any of those songs. I’m just glad I know of them.

What current space or technology projects are you or do you wish to be involved with?

There are some really interesting things going on right now. We just proved the existence of gravity waves, which fundamentally deepens our understanding of how the universe works. We found water flowing on the surface of Mars, and water geysers spewing from the moons of Saturn, helping to feed the rings of Saturn. We’ve had a close look at Pluto and its moons. We’re seeing planets around other stars and we’re talking of sending probes across not just the solar system, but interstellar. That’s amazing.

Meanwhile, six people are living on the space station. And we just landed a rocket ship. SpaceX did that. And Jeff Bezos with his company, Blue Origin, three times has launched the same rocket and capsule, and they’ve landed both safely. So he’s on the brink of taking people up to the edges of space.

Does your closet look like an astronaut’s closet or a regular man’s closet?

I would say it’s an astronaut closet. I have flight suits in my closet. What’s intriguing in my case is that they are enormously externally valued. There are people and museums that want them. My closet is distributed around the world. I have a space suit touring Mexico and others are in various museums around Canada. In my closet now, there’s one flight suit, boots and a space flight jacket. I recognize the historic significance of the things I’ve been involved with.

Tell us a little about one of your newest projects, “It’s Not Rocket Science.”

We were just looking, as a group within my family and my company, how can we continue to be a useful, contributing source of ideas and inspiration? So much of what’s missing in the common, popular discussion is actual, informed fact. So if you’re going to discuss a topical issue such as disease or child mortality or vaccination or the difference between weather and climate and the history of our planet, or language—how do you present it to people so they don’t just react to their initial bias? Or with an uninformed decision they’ve already made? We thought, let’s build an animated series based on myself—and slightly comic—but at the same time carefully researched and entertaining.

This story originally appeared in the June/July 2016 issue of Kiwanis magazine.