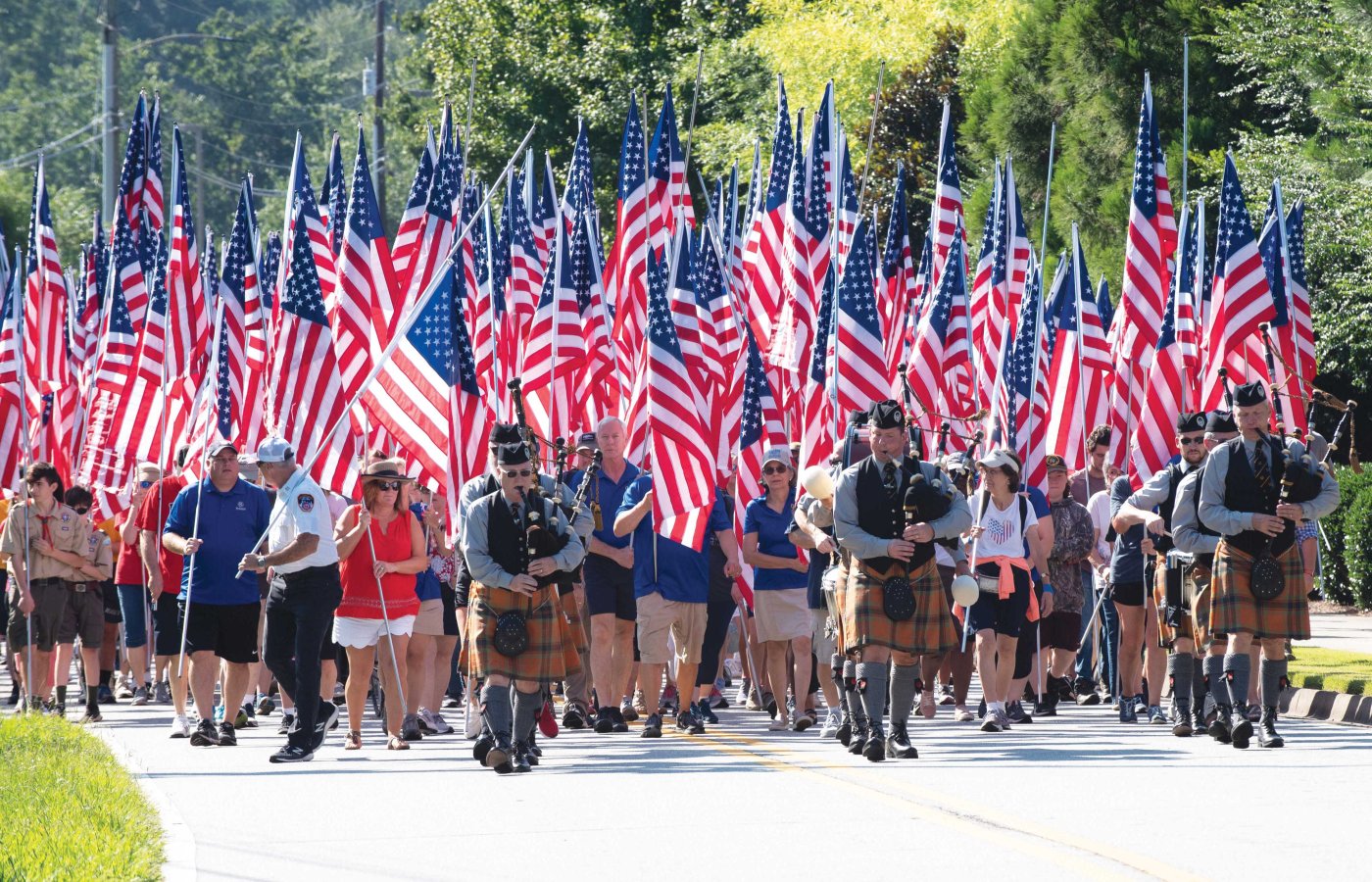 In Georgia, a Kiwanis club commemorated the 20th anniversary of 9/11 with a Field of Flags.

Since 1997, the Kiwanis Club of Marietta, Georgia, (affectionately called KCOM by its members), has been known for its signature flag project. On six patriotic holidays each year, more than 1,700 three-by-five-foot American flags are deployed by club members on 10-foot poles throughout the community. The project funds the club’s 10 annual scholarships.

Sadly, the terrorist attack on the World Trade Center in New York City on September 11, 2001, gave KCOM another reason to display its flags. Devan Seabaugh, the club’s president at the time, and the late Glenn Graham, flag committee chair, conceived of a field of flags in 2003 to honor those who died that day.

After months of intensive planning and preparation, KCOM members led a respectful community procession on September 10, 2003, carrying 2,977 flags to Kennesaw Mountain National Battlefield field. They were installed in precise rows on the historic battlefield, each flag representing a life lost. The following day, September 11, the club held its regular meeting outdoors against the stunning backdrop of thousands of American flags waving in the breeze.

A tradition was born: The club committed to recreating this stunning tribute every five years.

KCOM’s 2021 Field of Flags, designated as a Georgia Division 15 initiative, was recognized as one of the largest memorials in the nation. The events, spanning two weeks and marking the 20th anniversary, formally kicked off on September 4, with a mile-long processional of 2,990 flags. (The 13 additional flags represented the American service members killed in the evacuation of Afghanistan.)

Led by the Atlanta Pipe Band, hundreds of club members, Boy Scouts, ROTC students, elected officials and other individuals of all ages carried the flags from a local church to the battlefield and installed them in the meadow. Local news stations covered events.

Early on the bright, clear morning of September 11, the club held a community-wide memorial service at the Field of Flags. Heather Graham Tamburello, only a child when her father, the late Glenn Graham, helped to make the first Field of Flags a reality, sang the national anthem. Club President Edith Boy commented on the magnitude of the loss of life as she looked out across the thousands of flags in the field.

The featured speaker at the memorial was James D’Avolio, retired captain from the New York City Fire Department. D’Avolio emotionally described the sights and sounds as he rushed to Ground Zero on his day off to search the rubble for signs of life. While he lost many personal friends and colleagues that day, he was also part of the team that rescued the last person found alive in the debris.

“The beautiful skies over the Kennesaw National Battlefield Park on September 4, 2021, and the sea of American flags waving along the route leading to that hallowed ground reminded me of the roads that led to Ground Zero in Manhattan after September 11, 2001,” D’Avolio said. “I no longer mourn the brothers I lost. I only honor their memories, their heroism, their dedication and their service to their community.

“We as first responders, on the day we raise our right hand and swear an oath to protect and serve, we sign a blank check. And on September 11, for many, that check was called in. That’s what I think of when I see a firefighter, a police officer, an EMT or any member of our armed forces: a member of my community that may never have the opportunity to tell a family member, a friend or a loved one, ‘I love you, goodbye.’ That’s why I make sure I go out of my way to say ‘thank you’ for your service.”

As the event continued, 30 KCOM members and community volunteers took turns reading aloud the names of victims of the attacks. They stopped four times for the Marietta Fire Department chief to ring a bell to observe the exact moment, 20 years ago, when each of the hijacked airplanes crashed. A lone bugler played “Taps” to end the program.

After two weeks of hosting thousands of visitors, including survivors of the attacks and family members of victims, club members removed the flags from the battlefield and took them to a local church for disposition. Some were picked up by their sponsors, while others were prepared for mailing. Still others were donated to the club’s ongoing flag project.

Looking out over the Field of Flags, former club president Devan Seabaugh, an EMT company executive, described a personal connection to the memorial he first envisioned in 2003.

“When I look out over the Field of Flags, I think of all the lives lost, including EMTs, police officers, and firefighters who willingly sacrificed their lives to save others,” he says. “This field reminds us that freedom comes at a price.”

Learn more about the Field of Flags at 911fieldofflags.com.

Stage a flag event of your own. Learn more about Kiwanis partner Colonial Flag Foundation at kiwanis.org/cff.

This story originally appeared in the December 2021 issue of Kiwanis magazine.

One thought on “One life lost. One flag flown.”