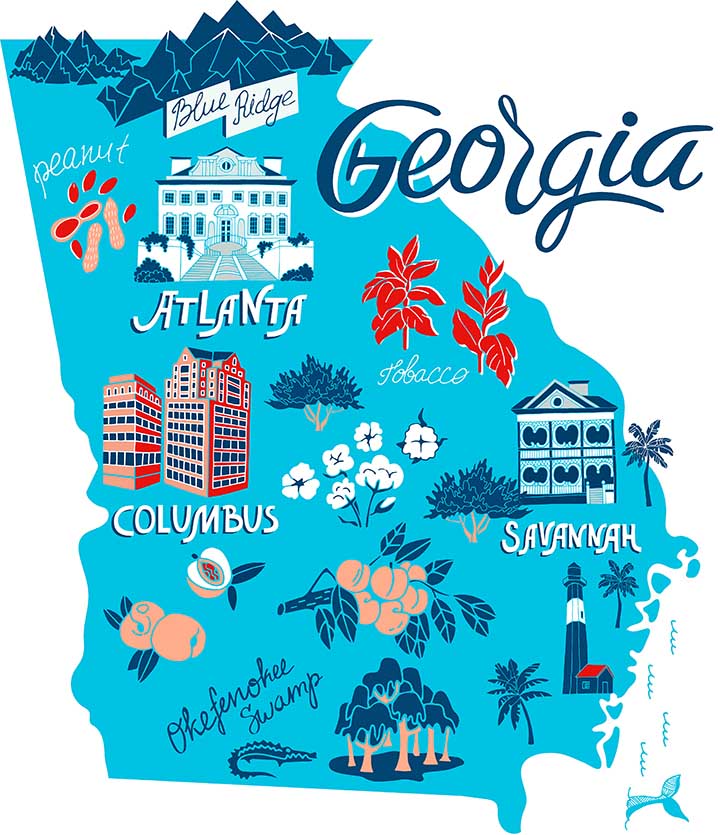 Three women from Georgia step up to lead the Kiwanis family this year.

Georgia became a state in 1788, making it the fourth in the United States. Its state flower is the Cherokee rose, and the state bird is the brown thrasher. The state was named after King George II, who approved the colony’s charter in 1732. Its nickname is the Peach State — even though it actually ranks third in production of peaches in the U.S., behind California and South Carolina.

But it isn’t only peaches that are grown in Georgia. Lately it’s become apparent that the state also grows Kiwanis leaders.

“I am so proud of the Georgia District’s strong youth leadership programs, and I am honored to be serving with these two outstanding student leaders,” says Baranko. “Our future is definitely in good hands.”

This is the first time in Kiwanis history that all three vice presidential offices have been held by women.

“It’s certainly a sign of the strength of the Kiwanis family of clubs and programs in Georgia to have three vice presidents from that district,” says Stan Soderstrom, executive director of Kiwanis International. “We’re proud of all our Kiwanis family members, from the adult members of clubs to those in our youth programs. This is a wonderful reflection on the importance of service leadership at all age levels.”

The Georgia District of Kiwanis is home to 150 Kiwanis clubs, 177 Key Clubs and 14 CKI clubs.

Here’s a closer look at each of the vice presidents.

Katrina Baranko
Baranko is from Albany, Georgia, and has served as a Kiwanis International trustee for the past three years. She is only the third woman to be elected vice president and will serve as Kiwanis International president in 2023-24. She’s a member of the Kiwanis Club of Albany and has been active in Kiwanis for 27 years.

Baranko has also served on the boards of directors of the Albany Area Chamber of Commerce, Liberty House, March of Dimes and the Albany Technical College Foundation. She’s a past chair of Lee County Heart Association and past president of both the Lee County Association of Educators and Women in Network. She is past district director of the Georgia Association of Educators. She was a finalist for Small Business of the Year and was named Junior Women’s Club Family of the Year, Georgia Business Teacher of the Year and Future Business Leaders of America Advisor of the Year.

Leah Reiser
Reiser, from Warner Robbins, is an elementary education major at Georgia Southern University, where she has been active in Circle K International for five years. She was elected vice president during the CKI Education and Leadership Conference, which was held in Salt Lake City, Utah, and online.

“This definitely is an honor,” says Reiser, who got involved with Kiwanis when she joined Key Club as a freshman in high school.

She credits Key Club and CKI with her development into the leader she has become, noting that when she began, she had difficulty speaking in front of groups.

Reiser was a member of Walnut Grove High School Key Club for four years and served as club secretary for one year. She’s a Key Club advisor for the Georgia District.

Her hobbies include writing, playing the piano, baking, reading and volunteering. Her favorite CKI service project is working with therapy dogs.

She hopes to be a kindergarten or second-grade teacher when she finishes college.

Melanie Kim
Kim is a senior at Lambert High School in Suwanee. She will graduate in 2022.

“Key Club is a forever-growing organization that has continuously offered student leaders opportunities like no other,” she says. “After joining this organization three years ago, I am still surprised by the immense power our members have to change the world. For this new year, I will do my best as Key Club International vice president to serve and represent our beloved organization.”

Kim has been involved with the Kiwanis family for five years, initially joining Builders Club in the seventh grade.

She joined Key Club when she entered high school and eventually served as chair of the Georgia District’s Contests and Policies Committee.

Kim has also served as district lieutenant governor and as a Key Club International trustee (2020-21). Kim has also been honored as a district outstanding committee chair.

In addition, she has worked with Key Clubs in the Jamaica, Utah-Idaho and Kansas districts and served on a Global Relations Committee to expand the reach of Key Club.

Outside of Key Club she is involved in STEM, working in synthetic biology to engineer organisms with different preferred traits and characteristics.

This story originally appeared in the October/November 2021 issue of Kiwanis magazine.

© Kiwanis magazine and kiwanismagazine.org, 2021. Unauthorized use and/or duplication of this material without express and written permission from this site’s author and/or owner is strictly prohibited. Excerpts and links may be used, provided that full and clear credit is given to Kiwanis magazine and kiwanismagazine.org with appropriate and specific direction to the original content.