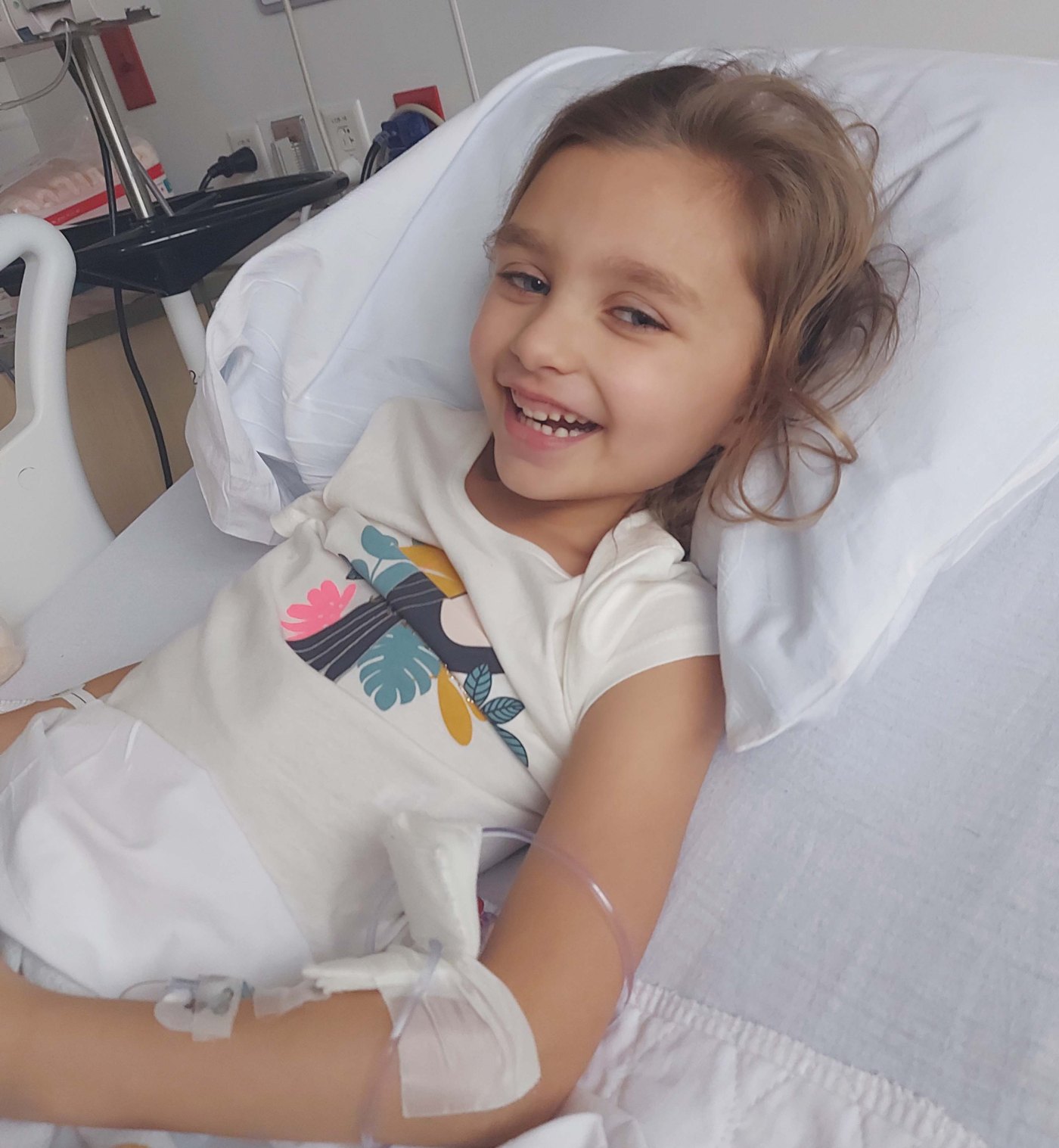 Kiwanians from the united states and france partner to help a young girl receive much-needed surgery during a pandemic.

Imagine being a child with a love of dancing but living with a disorder that can make even walking difficult, if not impossible. That’s the real-life situation 6-year-old Ilyana Debaine of France was facing in 2020.

Ilyana has spastic cerebral palsy, which inhibits her muscle growth. This condition can cause muscle contractures and orthopedic deformities; in Ilyana’s case, it was affecting her legs, and her parents feared it would become worse.

For Ilyana to get the best help possible, she needed highly specialized surgery in the United States. Such an undertaking is daunting in ideal circumstances, with financial needs, travel, language barriers and a four-week stay abroad to navigate.

But the situation for Ilyana and her parents, Laetitia and Julien, became even more formidable: She was scheduled for surgery in January 2021, as the COVID-19 pandemic continued to drastically impact day-to-day activities, travel and lives worldwide.

A dedicated group of Kiwanians, however, joined forces in an international effort to ensure Ilyana’s dancing dreams would not be derailed.

Ilyana’s parents had learned that if a child with spastic cerebral palsy has her spasticity reduced while she is young, any deformities can become less severe. St. Louis Children’s Hospital in Missouri specializes in such a surgical procedure, known as selective dorsal rhizotomy (SDR). Dr. T.S. Park, a neurosurgeon and director of the hospital’s Center for Cerebral Palsy Spasticity, has studied and refined SDR extensively and is known internationally for his expertise in the technique.

Laetitia and Julien wanted to give their daughter every chance to live her fullest possible life, so they began raising funds for the trip to the United States and SDR surgery, as well as a follow-up, minimally invasive tendon-lengthening procedure that would allow Ilyana to recover more quickly.

That’s where Kiwanians in the France-Monaco District joined forces to help. Jean-Marc Henry, president of the Issoire Kiwanis Club in central France and then lieutenant governor of the region, learned about Ilyana through regional media. His club wanted to donate funds to help. But with the pandemic lingering, club members knew they would not be able to hold the sixth edition of their flagship fundraiser, a 5K walk/run.

“Given the state of our club’s finances, we thought that the union of the clubs in the division would help more,” Henry says. “The mobilization of several clubs also allowed us to make a request to the KFE (Kiwanis France Entraide) foundation, which was accepted.”

The KFE foundation provides support to children and adolescents in need, and those funds joined others in the Kiwanian-led effort for Ilyana.

“There was a great sense of pride in having been able to help Ilyana and her parents,” Henry says, “especially since all of the city’s service clubs and all the sports, industrial and associative forces also mobilized to reach €75,000.”

Between the funds raised by the Kiwanians and the Debaines, the family now had sufficient funds to cover international flights and surgery costs. But they still needed somewhere to stay for the four weeks during which Ilyana would have both surgeries and time to recover.

Daniel Vigneron of Howald, Luxembourg, who served as president of Kiwanis International during the 2019-20 administrative year, knew exactly who to contact. Barb Thompson, membership coordinator for the Missouri-Arkansas District, lives in St. Louis. Vigneron asked if she could find a host family for the Debaines during their stay.

Normally, Thompson says, that wouldn’t be a problem. But that was before the pandemic. With health officials still asking people to limit activities and avoid close  contact with others, hospitality was taking a backseat to safety concerns.

“People were sympathetic,” Thompson says, “but they really weren’t ready to host a family.”

She then tried to assist the family in securing a stay at the St. Louis Ronald McDonald House, but hit another roadblock due to pandemic restrictions. So Thompson began looking for hotels instead. She discovered that Dr. Parks could arrange a discounted stay at a hotel near St. Louis Children’s Hospital, complete with an in-room kitchen for preparing meals.

Thompson then turned to Carla O’Brien, current governor-elect of the Missouri-Arkansas District, and the district’s Kiwanis clubs for help. O’Brien distributed a flyer outlining Ilyana’s situation and led a fundraising effort to cover the family’s hotel stay. Clubs responded with donations. One Kiwanian gave US$3,000, and her son matched the amount.

“He knows that Kiwanis is very important to his mom,” Thompson says.

Ultimately, the St. Louis-Arkansas District raised US$6,900. Not only was it enough to cover the Debaines’ hotel and grocery expenses, but it also allowed for the purchase of shoes that would accommodate the post-surgery splints Ilyana would need. And the district was able to purchase a Hypervibe, a machine that provides whole-body-vibration physical therapy (WBV), and had it delivered to the Debaine home in France. WBV can help those with cerebral palsy reduce spasticity, increase muscle activation and strength and improve walking and functional mobility.

As Ilyana and her family prepared for their trip to St. Louis for the scheduled January 5, 2021, SDR surgery, Laetitia and Thompson coordinated plans, despite the fact that Laetitia does not speak English and Thompson does not speak French. Laetitia can read and write in English, so they communicated through WhatsApp, an app that allows users to send messages using an internet connection, avoiding expensive text fees.

That would prove especially useful when the Debaines attempted to board their flight from Lyon-Saint Exupéry Airport on December 28, 2020. Travel was still restricted in and out of Europe due to the pandemic. The Debaines had obtained special documents to allow an exception for Ilyana and her parents due to the scheduled surgery. But airport officials in Lyon had other ideas.

“I got a WhatsApp from (Laetitia) in the airport in Lyon, and (airport officials) wouldn’t let them out of the country, even though she had special papers,” Thompson recalls. “They wouldn’t let them board. So she messaged me and said, ‘What can I do?’ Well, everything that I thought of, she’d already done. My only suggestion was that Lyon is a smaller airport, and maybe if they could fly through Paris, they would be more familiar with such letters of exception. So that’s what she did, ultimately, and they left two days later.”

Ground transportation didn’t prove much easier to procure. Thompson at first asked a friend who was a ride-share driver if he could transport the family to and from appointments during their stay. But he wasn’t comfortable knowing that the family had traveled through three airports to get to the U.S.

Undaunted, Thompson began calling taxicab companies and located one which had installed Plexiglas between passengers and the driver and sanitized the cabs after every ride. She called that company throughout the Debaines’ six-week stay, even arranging a ride during a heavy snowstorm so Ilyana could make it to an important medical appointment.

“They grew to know me, and they were very nice. Eventually, I knew all the dispatchers,” Thompson says with a laugh.

Thanks to the combined and determined efforts of Kiwanians, Ilyana successfully underwent both of her surgeries as scheduled. The first lasted three and a half hours; the second only 30 minutes. Thompson and her husband purchased groceries for the family each week and delivered them to the Debaines’ hotel lobby, where staff retrieved them.

Thompson met the family only once during their stay. They stood outside in a parking lot, socially distanced, and used Google Translate on their phones so they could understand each other. Now that the Debaines are home in France, Laetitia sends Thompson videos of Ilyana’s progress. And it’s impressive.

“Her life has changed a lot since the operation,” Laetitia says. “She no longer has pain in her legs. She is able to do new things every day and is very proud of it. On the other hand, it’s also difficult for her, because she goes to school every morning and goes to the physiotherapist every afternoon, which is very hard physically some days. But she hangs on because she knows that this is the way to progress further.”

Things are different for mom and dad Debaine, as well.

“What has really changed in our life since the operation is that we are less afraid for her future, although nothing is certain,” Laetitia says. “We know we made the right decision for her. And we are proud to see that she fights every day and always exceeds her limits.”

For Barb Thompson’s part, she admires the family’s dedication and drive.

“I was really glad that we were able to serve them and try to make this an easier experience for them. I was so impressed by the family. They are so resilient. I just admire them so much, and the sacrifice that they were willing to make to guarantee their daughter a brighter future.”

Today, Ilyana rides a bicycle without assistance. She participates in sports at her school. And she dances — thanks in no small part to an international effort by Kiwanians who wanted to help a little girl despite an ongoing worldwide pandemic.

“We were extremely happy with how we were welcomed, with the help of everyone we met,” Laetitia says. “It is truly an experience that has marked us for life.”

This story originally appeared in the August 2021 issue of Kiwanis magazine.