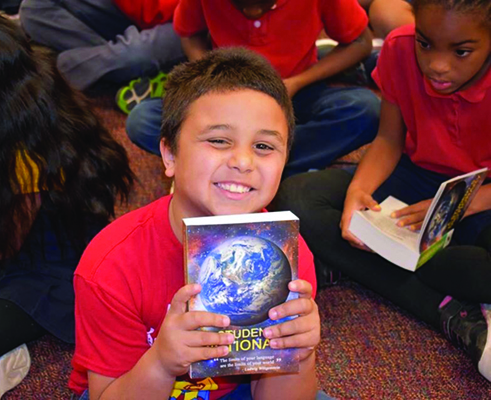 What were the objects that garnered such reactions? Electronic gadgets, trendy sneakers or sporting equipment? Try dictionaries.

“One parent who is also a teacher said her son spent the whole weekend reading his dictionary,” says Blakes, the state reading coach for South Carolina.

The Kiwanis club recently began distributing more than 1,000 dictionaries to third-graders at 10 elementary schools. But these dictionaries contain more than just word spellings and definitions.

They’re more like mini-almanacs, filled with interesting and entertaining items, including biographies, maps, a periodic table and measures.

“Research shows that pictorial representations of concepts that students are being taught strongly influence how those concepts are understood,” says Blakes.

Because nearly 40% of third-graders in Bluffton and Hilton Head public schools are Hispanic, the Kiwanians purchased additional Spanish-English dictionaries. Those books were directed primarily to third-graders at Red Cedar Elementary, where club Secretary Jim Jensen tutors as part of the United Way of Low Country’s “Read Indeed” program.

Blakes explains that third grade is a prime time to introduce The Dictionary Project.

“The third-grade school year is very pivotal because students’ reading makes a dramatic shift from how to read to reading more for content,” he says. “Students are expected to become more independent navigating text and reading on their own. Getting their own dictionary just goes hand-in-hand with where they are in their schooling.”

Adds Jensen, “One teacher told me that, even though everything is digital these days, she feels the dictionaries help kids learn new things. When you research something digitally, you have to have a topic in mind. With the dictionaries, kids can simply open them up to a random page and discover something they didn’t even know they didn’t know.”

This story originally appeared in the August 2019 issue of Kiwanis magazine.