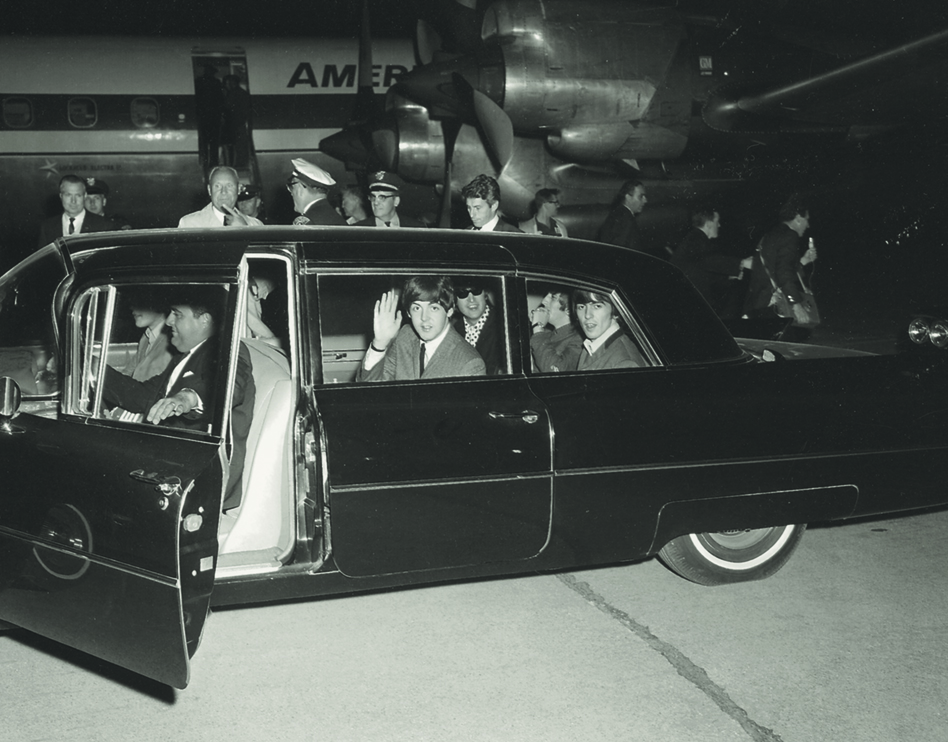 Art of rock ‘n’ roll caught in the lens of Cleveland photojournalist and Kiwanian George Shuba.

[FROM THE ARCHIVES: This story was originally published in the April 2009 issue of Kiwanis magazine.]

When asked by a representative at radio station WHK in Cleveland, Ohio, if he would take a few pictures of beetles for a local promotional effort, photojournalist George Shuba said ‘yes’ and wondered what he had gotten himself into. “Why did we agree to shoot bugs?” he asked his business partner Don Brill. Little did the young Air National Guard lensman realize how much his life was going to change once he learned the real focus of the assignment.

“It was September 14, 1964, around 10 o’clock at night,” recalls Shuba, a member of the Brooklyn, Cleveland Kiwanis Club. “And it wasn’t beetles, as we first thought. No, it was The Beatles arriving at Cleveland Hopkins Airport. I was the only still photographer there to shoot them. It was my first assignment photographing a rock ‘n’ roll band. It wasn’t my last.”

After covering The Beatles’ arrival and subsequent concert the next night at Cleveland’s Public Hall, Shuba went on to document the evolution of rock ‘n’ roll. From 1964 to 1975 Shuba captured much of rock ‘n’ roll’s royalty for Cleveland newspapers, including the likes of Jimi Hendrix, The Doors, James Brown, The Rolling Stones, Otis Redding, Sly and the Family Stone, Simon and Garfunkel , Aretha Franklin, The Who, Neil Diamond, and, of course, John, Paul, George and Ringo. Dozens of other artists also made Shuba’s historic freeze-frames.

Shuba’s art was celebrated at the Rock ‘n’ Roll Hall of Fame and Museum in Cleveland.

For all you shutterbugs, Shuba’s camera of choice back in the day was a Mamiya C33. For all you Hendrix aficionados, Shuba says he was the nicest guy in the world, soft-spoken, and just killer on guitar. 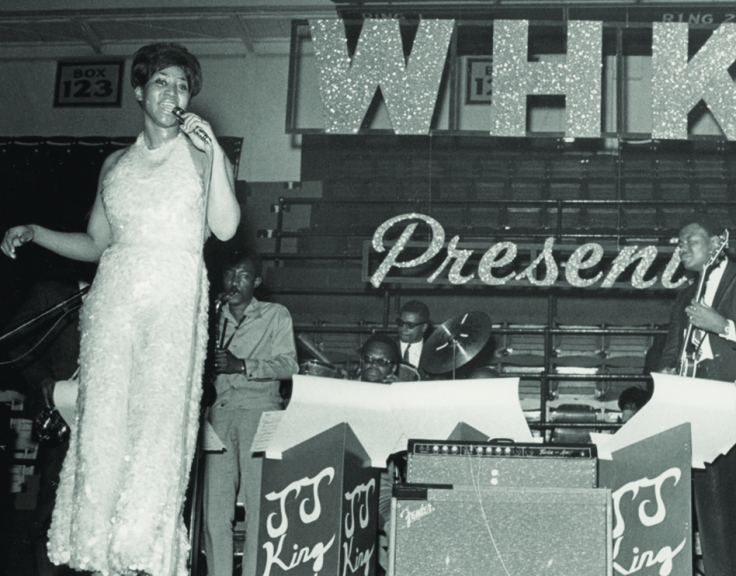 That’s one of the things I remember very well. When we were talking about this, I said to her, “You’re the star.” But she said, “Yeah, but you in the news media make us the stars.”

She was so nice and pleasant. She was really, really good. It came from the heart. If I were to have asked her to stand on her head, she would’ve.

Plus, I loved her music. She had that great gospel beat. 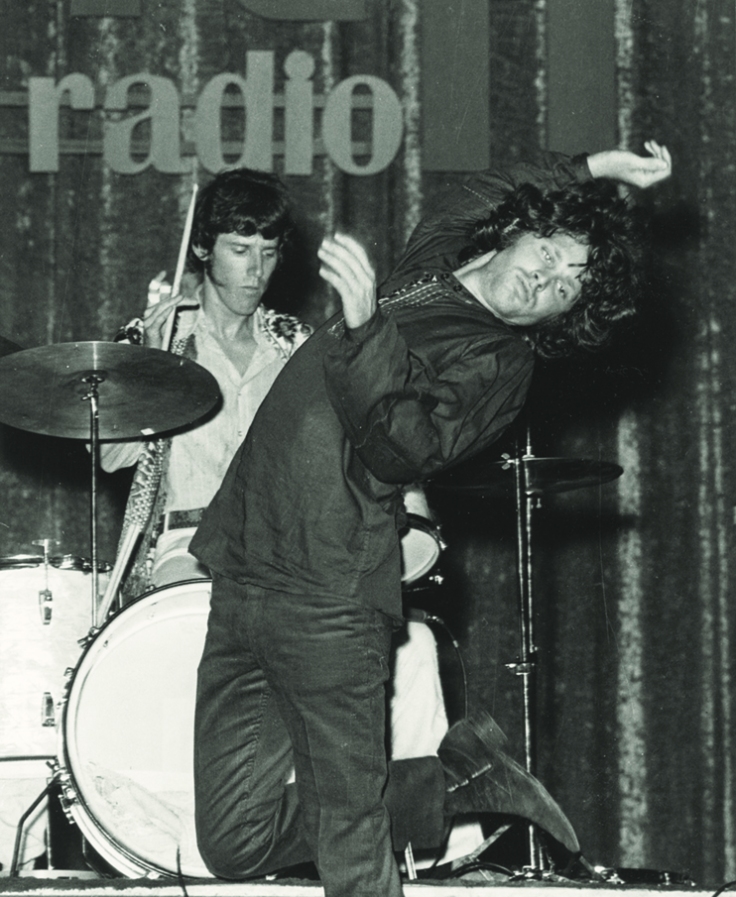 When “Light My Fire” came on, the kids were going to rush the stage. Jimmy Morrison literally jumped into the audience like the mosh pit of today, and they started carrying him around. He was as stoned as stoned could be. He couldn’t remember if it was day or night. He used lots of profanity.

Whatever I was seeing through the back of my camera, I was photographing. The difference between an amateur and a professional in my opinion is a millisecond. If you think about it, you’ve lost the shot. You’ve got to be be able to react in that millisecond.  That’s when you press the trigger. That’s what I was doing. I was capturing that moment for history. I was preserving history for that moment in 1968.

I didn’t have too much of a problem (dealing with the chaos), but a guy did sucker punch me. He hit me in the side of the face. I asked him, “Why’d you do that?” And he said, “I just don’t like you.”

The crowd was such a mix of hippies and conservatives. You can tell in the photos. One minute, they booed him, but yet, they cheered him. 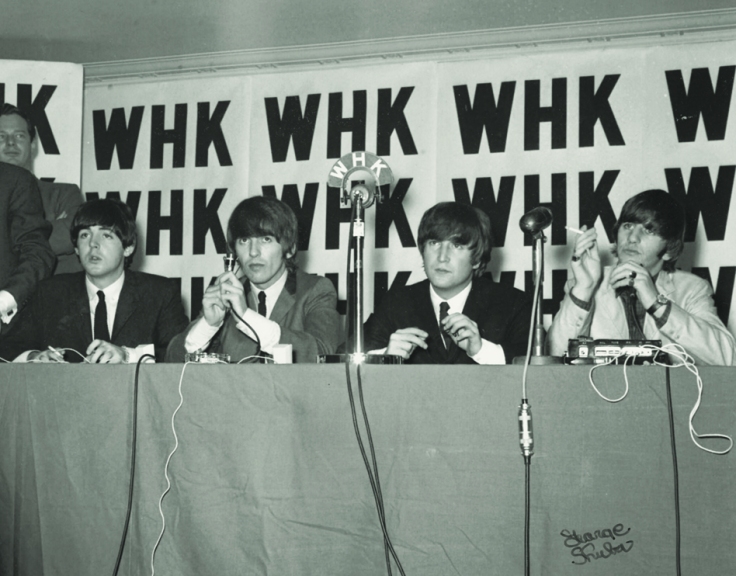 The Beatles coming off the airplane is the first photo I took of the Beatles. I was the only still photographer there. All the rest were the TV cameras.

It was nighttime—8 or 9. What had happened was that they were supposed to arrive at Cleveland Hopkins Airport and they had a propeller-driven aircraft but they had such a throng of fans there that if they had broken through the barriers—the police were holding back the kids—they would’ve decapitated those kids. So they chose to land and taxi over to what is now the Cleveland I-X Center, where they used to manufacture tanks.

They jumped off the plane and right into the limousine. Only certain people knew where they were landing. The kids never saw them. They were away from the crowds.

They then went downtown to the Sharaton right on Public Square in Cleveland and went to their room. The Beatles were in the Presidential Suite. The radio station, WHK-AM (one of the stations Shuba was shooting for), was in the Governors Suite, so we were directly below them, one floor down. We were trying to get some press interviews, but they said they were tired from the journey.

I started to leave in the wee hours of the morning. I was coming out and heading down to the elevator. Out comes Ringo with this cop, and so Ringo looks over at me and I said, “Hi, Ringo.” We were talking and got onto the subject of cameras. He said he was a camera buff and he used a 35mm camera. We had a probably five-minute conversation in this special elevator.

What Ringo was going out to do was go around the city. He was sorta like a tourist. So he got a chance to see the city of Cleveland at night. He was very genuine. I couldn’t understand his—I don’t know what you want to call it, his cockney accent—whatever the accent from Liverpool would be. It was a little difficult to understand. But it was nice to converse with him. 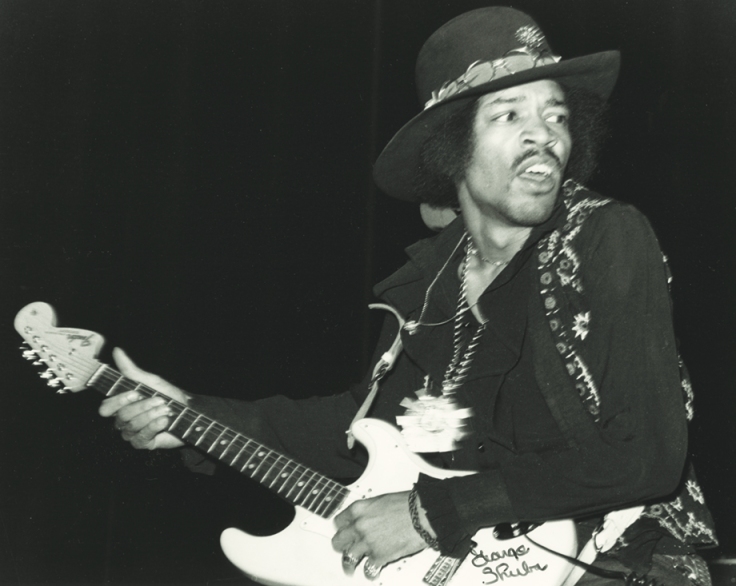 I spent pretty close to almost eight hours with him all throughout the course of the day. One of the things he did—I wasn’t there with him—but he went out and bought one of his fans or his girlfriend a brand new Corvette. He paid cash for it.

The thing I remember about Jimi Hendrix is that the first concert was at 7:30 and the second was at 9:30. What I tried to do, since I knew nothing about Jimi Hendrix, I wanted to watch and hear his music. See how he performed. What I did was I watched the first concert. But just prior to the concert, I remember the MC, the master of ceremonies, coming out and saying, “We think there is a bomb underneath the seats in the hall, so could everybody stand up and lift up your seats to look and see if there’s a bomb?” And like a stupid fool I lifted up my seat. I could have blown up. Fortunately there was no bomb there.

When I watched him play, I had never seen anyone play like he played. I mean, he made that thing dance. The music that came out of that guitar was unbelievable.

He was left-handed. I am not a connoisseur of musical instruments. But I sent the pictures to Janie Hendrix (Jimi’s stepsister). She told me—I got a letter from her—she said she thought these were the best series of pictures ever taken at one venue that she had ever seen.

What else do I remember from that concert? Jimi went into what we called his duck position. I think he was sorta like Chuck Berry. At one point he played upside down. And at one point he literally took his guitar and smashed it into his amps. He couldn’t bust that guitar. He was having a tough time with it.

Of all the times I did all these concerts, I never got a piece of memorabilia. That guitar, even the small pieces of it, would have been worth thousands of dollars today. Or the autographs I never got. Because we were professionals. We were journalists. One of the unwritten rules of journalism is you don’t ask for autographs. Whoever wrote that should be shot. When you’re in this profession, you have to be professional and you still have to be humble. You take a lot of abuse. And yet, never do you get compliments. It’s very rare that someone would come up to you and say, “Wow, you really did a great job.” You know, but you make one mistake and I tell you, you’ve got everyone and your editor jumping your bones.

Would I do it again? Absolutely. In a heartbeat. I had a blast doing all this stuff. 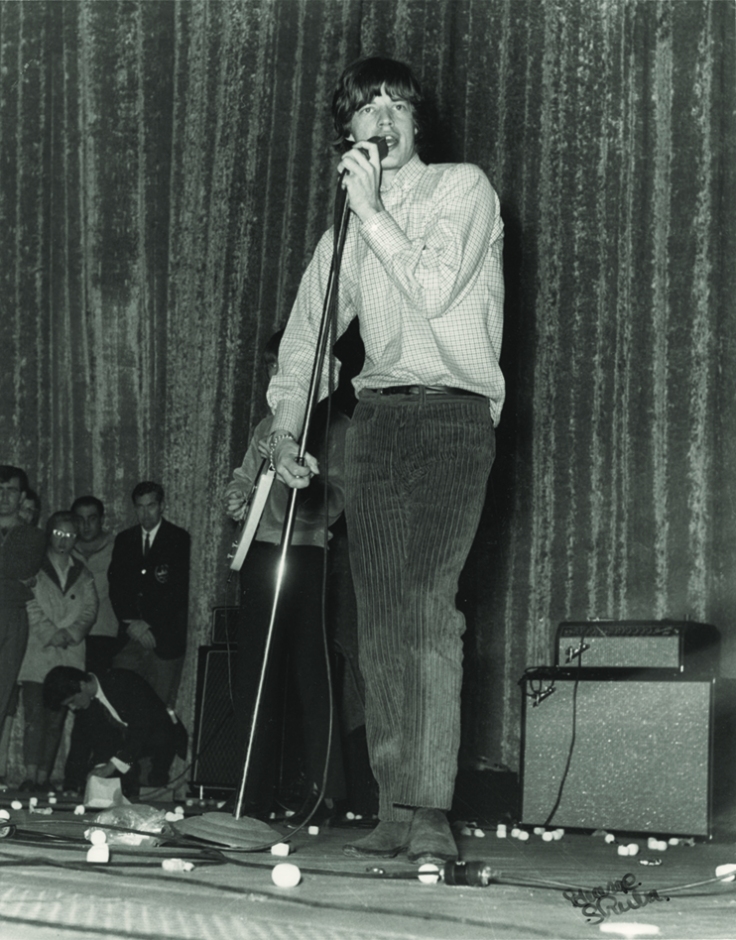 Jagger and the Stones were known as the bad boys of rock ’n roll at the time. When we photographed them, they had followed the Beatles. The Beatles had come in in September; they came in November. They (the Stones) were disappointed because they only had about 3,000 fans while the Beatles had about 10,000-plus fans.

So in this photo, those little white things are marshmallows. The Beatles came out and said they liked jellybeans, so the kids, to show appreciation for the music, used to throw jellybeans. Well, the Beatles said don’t throw jellybeans because they hurt.  Well, the kids got very ingenius. They inserted two or three jellybeans into a marshmallow so that when they threw them they would land on stage. If you add the weight of the jellybean, it acts like a projectile. 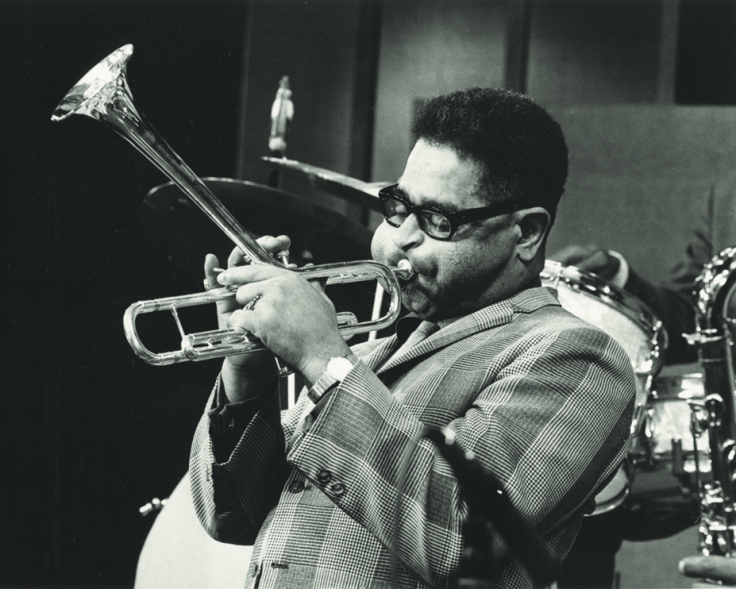 That shot of him is just really great. Look at the extension of his cheeks. I don’t even know what kind of horn that would be.

This is the only shot I have of Dizzy Gillespie. It’s the only one I can find. In 1978, we got robbed at the studio. It was an inside job. They took paint and poured it into my photo files. I had to try to sort everything out. I lost some great stuff. Some of the Beatles. I still don’t know what I lost because I didn’t keep an accurate record because most of my files got destroyed also. There was a lot of great stuff taken. I managed to salvage this piece.

This Upbeat show was in 110 major markets. It ran about 10 years. If a star could break a record in Cleveland—when I say break a record, I mean trying to make a hit out of this record—they could break it anywhere. We were called the trial-and-error city.

This story originally appeared in the April 2009 issue of Kiwanis magazine.

One thought on “Rock art”