The students in Memorial School’s Honors Accelerated Placement classroom were concerned. This group of 60 first- and second-graders – all of whom scored above grade level in reading and math – had heard a lot about the Zika virus through news reports. During one of their weekly meetings at their Garden City, Michigan, school, they began discussing the issue and the cause behind it: mosquito bites.

“We began wondering what we could do to get rid of mosquitoes,” says Kelly Depriest, a teacher at Memorial and one of two staff to oversee the HAP. “The students started thinking, reading and brainstorming ideas. Bats seemed to be the most practical way of ridding the community of mosquitoes.”

So the students decided to build bat houses. They found a design they liked and thought they could craft – with a little help, that is. 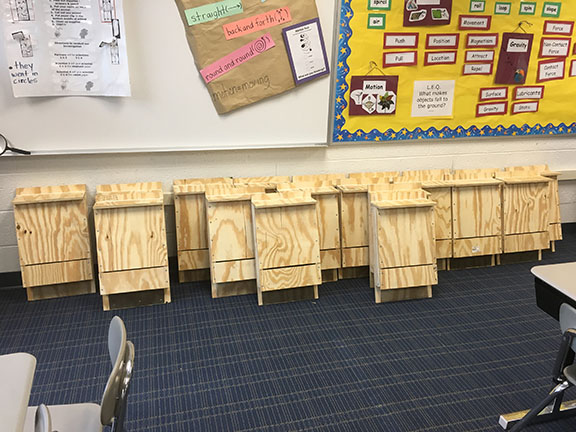 That’s when the Kiwanis Club of Garden City, Michigan, stepped in. After receiving a letter from the students asking for assistance, they readily answered the bat signal. At the students’ request, Home Depot had agreed to donate all necessary materials and tools. Five Kiwanis members and a guest visited Memorial to precut the items, assemble a prototype and then supervise the construction.

“One student acted as a project manager and kept the students rotating through the assembly line process, which the Kiwanis members created for ease of completion,” Depriest says. “All of the students participated throughout the day.” 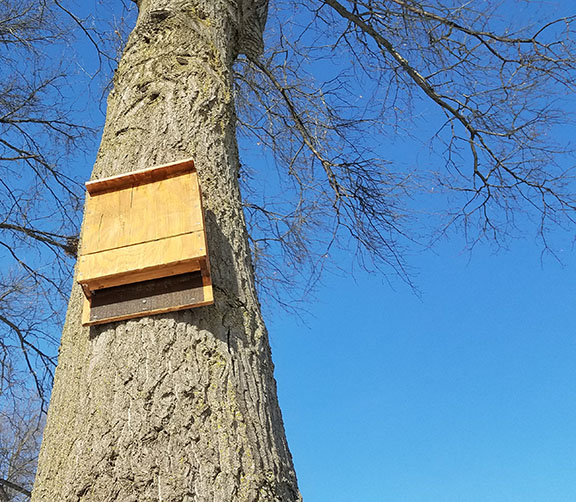 Their hard work yielded 22 bat houses. The students already had written to the city’s mayor and the school district’s superintendent and received permission to install the houses in community parks and on school properties. Several Kiwanians purchased houses for themselves. The students donated those funds back to the Garden City club to support future community projects.

“Most of the children had never handled tools before and were thrilled to have that opportunity and to build something useful at the same time,” says Tom Jankowski, immediate past president of Kiwanis Club of Garden City. “As for the Kiwanis members, we had as much fun or more than the children involved.”

Interested in building your own bat house? Visit batcon.org for more information. This story originally appeared in the August 2018 issue of Kiwanis magazine.