In the United States alone, one in three young people will grow up without a mentor, reports the National Mentoring Partnership (MENTOR). Consider that there are nearly 74 million Americans under the age of 18, and the implications are staggering. Various studies show that kids with mentors have better school attendance, are less likely to use drugs and are more likely to go to college.

Being a mentor, however, isn’t a one-and-done proposition. It requires time, commitment and consistency. But as these three Kiwanis clubs discovered, the results can transform a child’s life. 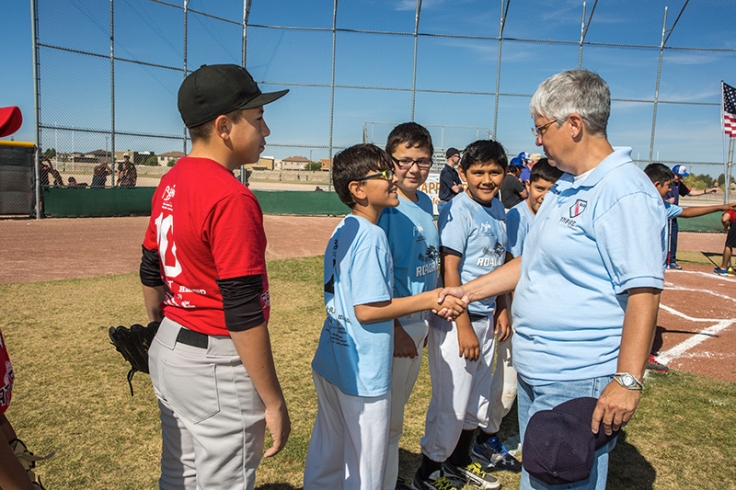 It’s a windy May morning in east El Paso, Texas. Since 7 a.m., a group of fourth-, fifth- and sixth-graders has been on the sports fields of Horizon Middle School, the boys busy playing baseball, the girls focused on softball. Parents cheer and shout words of encouragement from the stands, and volunteers run a concession booth, ready with ice-cold water to offset the brutal heat that makes itself at home here.

This Saturday scene plays out regularly in countless cities and towns around the world—but this is not your typical Little League or parks and recreation program. This is BASE Play RBI, which is designed to serve youth struggling with academic and behavioral issues at school and with poverty—often extreme—at home.

More than half of the 250-plus BASE Play kids live in colonias, unincorporated communities along the Texas-Mexico border. Most colonias lack basic necessities that the kids in Little League games over in west El Paso take for granted: potable water, sewer systems, electricity, safe housing, paved roads.

“They’re coming from the most impoverished communities that we have in our county,” says David Hendrix, president of the Kiwanis Club of El Paso-Coronado, “so they don’t have the opportunity to excel in the classroom as some of our more prominent residents do. The kids that are having behavioral problems and the kids that aren’t doing well in the classroom educationally, there are reasons behind that.”

Four years ago, Kristi Borden, director of development for the El Paso Border Youth Athletic Association, set out to address that opportunity gap at the request of the association’s founder and board president, Dwayne Aboud. Borden consulted with staff from the Clint Independent School District (ISD), which serves the majority of El Paso County’s 322 colonias. How, they wondered, could they best help these students? The result was BASE Play, which initially focused on fourth-graders in three ISD Title I elementary schools, which enroll a majority of children who live in poverty.

“Fourth grade is really a pivotal point,” Borden explains. “Kids become more independent and start making their own decisions. When this connection began, a fourth-grade student that got behind in reading or math had a one-in-10 chance of catching up by eighth grade. So we’re at an open gap in fourth grade, and if it’s not addressed, it never closes. It’s worse for kids living in poverty.”

In BASE Play, kids learn how to play baseball (boys) or softball (girls) through two three-hour supervised practices each week. On Saturdays, participants from all schools meet from 7 a.m. to 3 p.m. to put their skills into play during actual games.

Kids need to complete their homework to attend practices, a major motivation. The students look forward to playing with their friends in a safe environment and getting a hot meal before being transported home by school-provided buses. Every three weeks, a BASE Play adult checks each child’s grades.

“If they’re failing in any classes, it gives us a three-week window to make sure we help them out,” says Letty Martinez, BASE Play coordinator and mother of a program participant, “whether it’s tutoring, after-school help, or anything of that nature to bring up their grades.”

The results: About 64 percent of students with the greatest challenges go from failing to passing grades during a 12-week season of play—a key development in a school district with a 47 percent high school graduation rate.

“I always felt indifferent when we’d just write a check to a nonprofit, charitable organization,” Hendrix says. “You write the check, sometimes you’d get a thank-you, sometimes you wouldn’t. You’d never know where the money was being used. (With BASE Play) I can see the results. I can see where our money’s going. I can see the success of these kids in the classroom. Their grades are going up. Their behavioral issues are going away.”

The latter, Borden says, can be attributed to the crucial life lessons students learn along the way.

“Baseball and softball are the greatest team sports for that kind of instruction and mentoring. The classic is that you can fail seven times out of 10 and still have a great batting average. It teaches you persistence, and it teaches you that though you may have limitations, through diligence you can succeed.”

“It’s not that we have some brilliant strategy that transitions the kids to passing grades. It’s that we never fail them. The policy of the program is that we never cancel practice. So we’re always out there, and that seems to have the biggest impact on the kids. The magic bullet is that we show up.”

Watch videos about the El Paso, Texas, Base Play program: 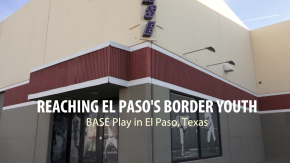 Reaching El Paso’s border youth
Kristi Borden, director of development for El Paso Border Youth and lead director for BASE Play RBI, tells us how they use baseball and softball to help kids.

Teaching skills, building community
Base Play program in the border towns of El Paso, Texas, brings a community together with the help of Kiwanis.

Base Play inspiration
Dr. Dwayne Aboud, founder and board president of El Paso Border Youth Athletic Association, talks about Mary Sernas, the inspiration for BASE Play. 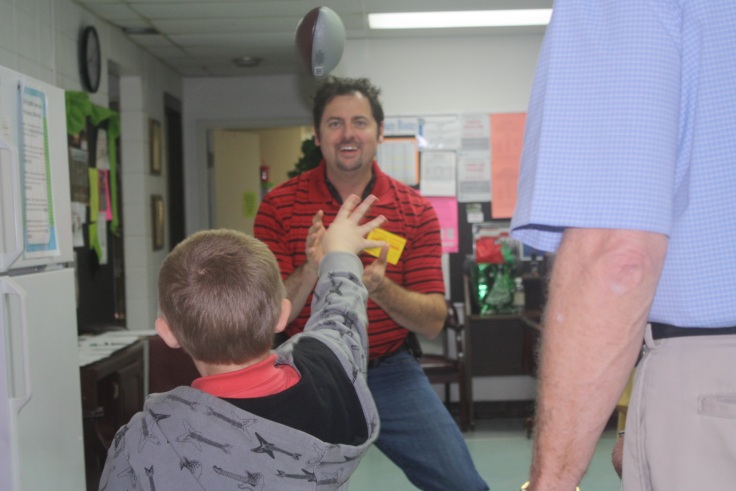 In 2015, the principal and vice principal of Appling County Primary School approached the Kiwanis Club of Baxley, Georgia, with a request for help. Children enrolled at this Title I school serving pre-K youth through second-graders face daunting challenges. Many live in single-parent homes. Some have a parent in prison. Most live below the poverty level. But the Appling administrators weren’t asking for an infusion of cash. What they needed, they said, was a commitment of time.

The Kiwanians answered by forming the Baxley Kiwanis Club Mentoring Program—or, as participants refer to it, the M&Ms, mentors and mentees. Nine members signed up to be matched with a child for the duration of the school year, agreeing to meet, on average, once a week for one hour.

If successful, the match would continue through the child’s primary-school tenure.

Club member Janine Hunter not only agreed to be a mentor, she volunteered to head up the program. She was matched with then first-grader Jariah, the oldest of a single mother’s five children. Hunter quickly learned, however, that her impact extended much further.

“When you walk in the door, they all run to hug you—the whole class, not just your child,” she says. “Because they all want a hug, and they all want to be loved.”

Such seemingly simple interactions, so common to the Kiwanians, were new and nurturing for many of the mentees. One member bought a child his first-ever McDonald’s Happy Meal; many kids see their birthdays celebrated for the first time. An observant club member helped turn a child’s failing grades into passing ones by realizing the student needed eyeglasses, not special-ed classes.

Greg Hudgins, president of the Baxter club, recalls buying a medium-size pizza to share with his mentee during lunch. They did share—Hudgins ate one slice, his first-grade student hungrily consumed the rest.

“A lot of times, we take for granted so many things,” Hudgins says. “Just a meal. Just thinking, ‘Well, I’ve got a meal, no problem, and I’ll get another one at the next time to eat.’ These children we mentor, they don’t have that often. They may not know when their next meal will come.”

For the upcoming school year, 12 Kiwanians will be mentors, and Hunter and Hudgins hope to see others answer the call.

“In life, we should slow down sometimes and realize that we’re so fortunate and so blessed, and others are not,” Hudgins says. “And we should take the time to give back to our communities and our children, to show them the love that they’ve never seen before.” 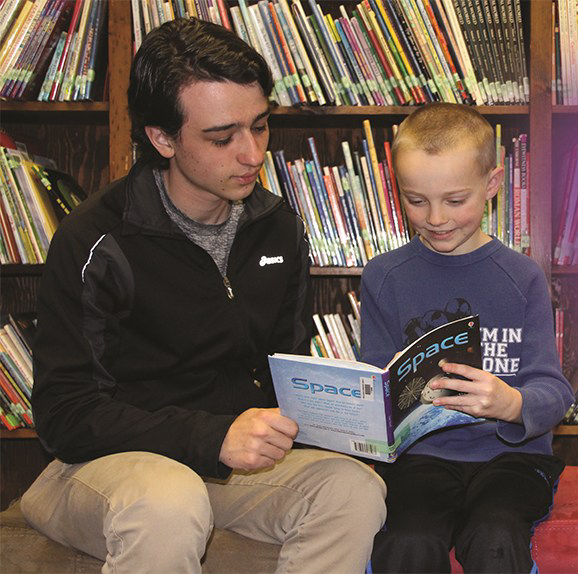 Talk about a long-term commitment. The Kiwanis Club of Monroe, Wisconsin, not only has worked with Big Brothers & Big Sisters for 32 years, it created and launched the county’s agency.

In 1983, Dave Mosher, then the club’s vice president and now its president, used survey tools provided by Kiwanis International to discover how club members could best help the community. Results showed an overwhelming need for mentoring programs for kids. Inspired, he set out to visit existing Big Brothers & Big Sisters agencies, one in Wisconsin, the other in Illinois.

“They both told me ‘Forget it. We’ve tried it. It will never work in Monroe,’” recalls Mosher. “So that was enough to get me excited about doing it.”

At least equally important is the Kiwanians’ dedication to serving as mentors. Big Brothers & Big Sisters offers two adult-child match programs: Community-Based Mentoring, in which adults commit to be an ongoing mentor for at least two years, and Lunch Buddies, which allows them to visit a mentee during lunch throughout the school term. Kiwanians have participated in both, sometimes forming lifelong friendships with the youth they mentor.

“We have a lot of pictures of matches where their ‘little’ was in their wedding or (the mentored youth) still stay in contact today and have families of their own,” says Shannon Kaszuba, executive director of Green County’s Big Brothers & Big Sisters.

Mosher became a lunch buddy mentor two years ago to his mentee, James, then seven.

“I have lunch with him, and we just chat,” he says. “Sometimes it’s just the little things, and you don’t even know you’re setting an example or planting a seed, but they look and they hear. It’s not until later that you realize that you really made a difference. You just never know what little thing might lead to a life-changing event.”

This story originally appeared in the September 2017 issue of Kiwanis magazine.

One thought on “Time after time”