Refugees are embracing the Willkommenskultur, or “welcome culture,” practiced by Kiwanians.

In Ratzeburg, a quaint town with a population of about 14,000 located in Schleswig-Holstein, Germany, there are nearly 250 refugees living among the locals. They are mostly young, motivated individuals from countries such as Syria, Afghanistan, Armenia, Eritrea and Iraq. Places most of us have only seen on a map or read about in news reports. They came here looking for a better life. And the Kiwanis Club of Ratzeburg is welcoming them and helping them find their way. These are a few of their courageous stories.

After serving half of a mandatory two-year military service in Syria, Ebrahim Alakil found himself in the middle of an increasingly unstable war zone. And like so many others—statistics show nearly half of the members of the Syrian Armed Forces have fled since the start of the civil war in 2011—he wanted to get out. So he headed for Turkey, where he worked for one year in various construction and welding jobs. But since it’s completely illegal to just up and move to and work in Turkey, he decided he needed to move on. Again. So he paid a trafficker 2,000 euros to help get him from Turkey to Italy.

This was just the beginning.

“I went into asylum in a monastery in Germany until the deadline to leave had passed. I stayed for two months in that monastery until I got the papers.”

“Word got out that you could become legal in Germany,” he says. So that was the plan. To make it to Germany. His one-month journey included getting caught by police and fingerprinted in Bulgaria. He was caught again in Hungary. But he continued to make his way. Bulgaria. Serbia. Hungary. Austria. Germany. He traveled by foot and train. He even hitchhiked. Sometimes he had to hide. It took him half a year. As if this journey weren’t difficult enough, once in Germany, 24-year-old Ebrahim faced another hurdle: the law known as Dublin III, which states that all asylum seekers must remain in the country through which they first entered the European Union. For Ebrahim, that was Bulgaria, not Germany.

But he wasn’t about to go on the run again.

“I went into asylum in a monastery in Germany until the deadline to leave had passed,” Ebrahim says. “I stayed for two months in that monastery until I got the papers.”

Those papers allowed Ebrahim to begin the asylum process—legally—in Germany.

But he’s still alone. No physical contact with family and old friends makes it difficult.

Ebrahim has two brothers, two sisters and parents back home in Syria. He’s able to keep in touch with them on a regular basis thanks to satellite Internet from Turkey, installed by the rebels (much Internet access has been cut by the Bashar al-Assad regime during times of unrest). Still, he says, that digital contact offers only a bit of relief. The danger is real.

“One lives here, but one doesn’t live,” he says of his home country. “There are still daily bombardments. With the Russians now involved, it’s daily. All day long.”

When the war is over, Ebrahim says he wouldn’t hesitate to go home.

“People in Germany are awesome,” he says. “And the people in Ratzeburg have been a lot of help. Germany will always have a place in my heart.”

But for now, Ebrahim plans to stay in Germany, where he hopes to continue to improve his German language skills and to start an apprenticeship.

Unlike many refugees forced to leave their countries to escape war, persecution or even natural disaster, Amalya Abgaryan was in no real danger back home in Armenia. Instead, she says, she and her husband fled their country in March 2014 because of corruption. And according to the United Nations Development Programme, corruption in Armenia is a “serious challenge to its development.”

Amalya and her husband paid 6,000 euros on the black market to get a Schengen visa, which at the time allowed them to travel internationally within the 26 European countries that are part of what is known as the Schengen Area. This is how they made their way to Germany. Schengen countries currently have relaxed borders with one another—meaning moving about is easier. But there is talk of strengthening security at the borders because of the migrant crisis.

Now in Ratzeburg, Amalya is taking the necessary steps to be able to stay. She’s learning the language, looking for a job and showing effort—which she hopes will help in her asylum process in Germany. But there are no guarantees. Refugees are given a deadline to get everything in order; and if they don’t, they may face deportation. There are no clear, written rules. But one thing is for sure: Amalya’s dedication to her studies is paying off. She’s a “top B1 student” in her German language classes in Ratzeburg.

But as with many of the refugees in Ratzeburg, she’s not taking all the credit, not even for the progress she’s made so far. In fact, she’s quick to thank her teachers and Kiwanian Werner Büttner for helping her.

“Every day, I want to learn something different, and he’s always trying to make it happen,” she says.

The 26-year-old hasn’t seen his family in a year, and he never had the chance to say a proper goodbye. As an employee of the United States Agency for International Development, he worked in his home country of Afghanistan, often in extremely dangerous areas. But it was while traveling in Italy for a Model United Nations conference that his life took a surprising turn.

“I received a warning email from my supervisor in Afghanistan that four of my colleagues who were traveling in a district of Herat had been kidnapped by the Taliban,” Farhad recalls. “My supervisor advised me to ‘Stay wherever you are. It’s better not to come back.’ So I stayed two more weeks in Italy to make a good decision.”

“We grow up in a community where family is always together; it’s like this in Afghanistan. This is my first time being apart.”

His decision: He would head to Germany, where several of his family members (sisters, an aunt and uncle and some cousins) were living. This was his best option. He longed for closeness to family.

“We grow up in a community where family is always together; it’s like this in Afghanistan,” he says. “This is my first time being apart.”

Since finding refuge in Ratzeburg, his German language skills (both writing and speaking) have become quite impressive. He recently received great news: His academic degree in computer science from Herat University will now be recognized in Germany, meaning he can apply for a master’s program. But there’s a catch: He needs a residency permit. This is the next (and very big) step in allowing him to stay in Germany. But there’s no way to know how long the process will take. So he’s still unsure what the future holds.

“I’m grateful for the help of everyone here,” he says. “The people around me are so kind. They are a blessing.”

But Ratzeburg isn’t where Farhad wants to stay. At least not forever.

“Afghanistan is home. I want to go home.”

Eritrea is a small country in the Horn of Africa. It may be small in size, but its Eritrean Defence Forces are not. They are among the largest in all of Africa, in fact. All able-bodied men and women upon reaching age 18 must serve, and proof of military service is also required in order to attend university.

Abdurauf Adam, 25, was worried he wouldn’t make the cut to attend university after serving his mandatory military service. He didn’t want to become a permanent reservist, which is also required. So he decided to set out to find a better life outside of Eritrea. His journey would not be easy.

“I had to work in Libya for a year to come up with more money. I worked in Benghazi and had a few relatives in Saudi Arabia and back home who helped.”

His trip began on foot and bus, taking him a week to reach Sudan. But Sudan posed a problem. There was a desert to cross, plus a strict patrol at the border with Libya. It would take him another five days to get that far and cost him quite a bit. A trafficker offered to “get you wherever you need to go” for US$1,100. Then in Libya, that trafficker abandoned him and took the money.

“I had to work in Libya for a year to come up with more money,” he says. “I worked in Benghazi and had a few relatives in Saudi Arabia and back home who helped.”

Once he had more cash for the journey, he paid a second trafficker US$1,300, this time to spend three days on a three-level boat with 200 other refugees, all crossing the Mediterranean Sea in hopes of reaching Italy. But the boat stopped halfway, and by pure chance, a second boat plucked all 200-plus refugees out of the sea and took them to Italy. Abdurauf took a bus to Rome, then a bus to Milan and then hopped on a train, hoping to reach Sweden.

“I had a telephone number from a refugee from Eritrea who now lives in Sweden,” he says. This man was his lifeline, offering guidance over the phone. Abdurauf used technology a lot on his journey—apps, prepaid phones, maps, schedules, bus routes. But he was taken from a train during a police raid in Stuttgart, Germany. He never made it to Sweden.

Abdurauf is building a new life in Ratzeburg. What happens now?

“I need an apprenticeship in carpentry,” he says. “I need to learn German better. But good things are next.” Ratzeburg Kiwanian Werner Büttner sits at a large wooden table during a quick lunch break, his three-ring binder open to reveal information about many of the refugees he has come to know. As he talks of how the asylum process works (and doesn’t) in Germany, he flips through the pages, showing examples of just how much back-and-forth needs to happen to do things most of us would consider commonplace: finding an education, a house, a job. None of this is easy for a refugee.

“These are motivated young people, and they are well received. It’s no use looking over the fence and criticizing them for not integrating. We have to do something. You can’t hate them. Once you know them, and they have a face, you can’t hate them.”

“You need good friends for stuff like this to work,” he says.

He apologizes as he makes a phone call and sets up meetings, all in an attempt to make some sort of progress for the young people who have become central in his life. He does more than just talk about what’s needed—he sits down with refugees and figures out how to make it happen. He helps with language tutoring. He finds companies willing to offer internships. He hunts down paperwork. And it’s all in his mobile office—his binder.

“These are motivated young people, and they are well received,” he says, mentioning Germany’s Willkommenskultur. “It’s no use looking over the fence and criticizing them for not integrating. We have to do something. You can’t hate them. Once you know them, and they have a face, you can’t hate them.” 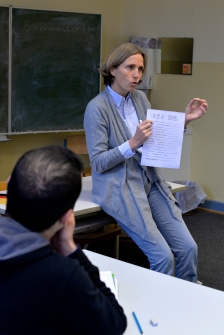 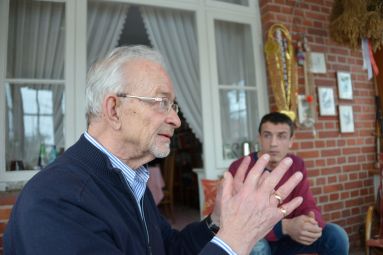 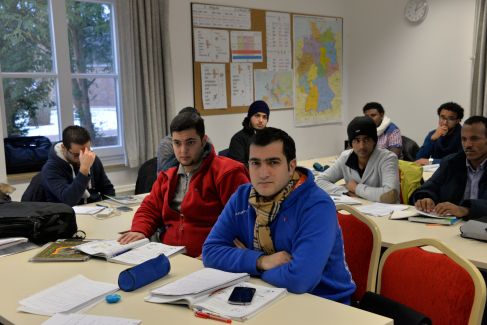 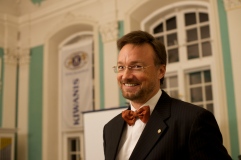 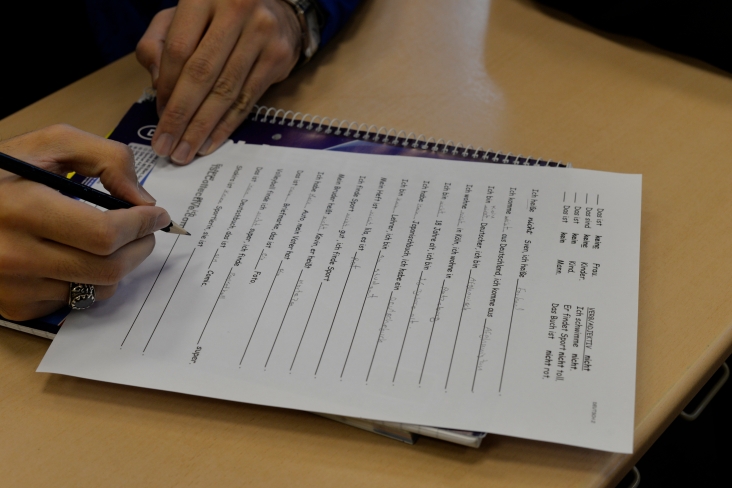 This story originally appeared in the March 2016 Kiwanis Magazine