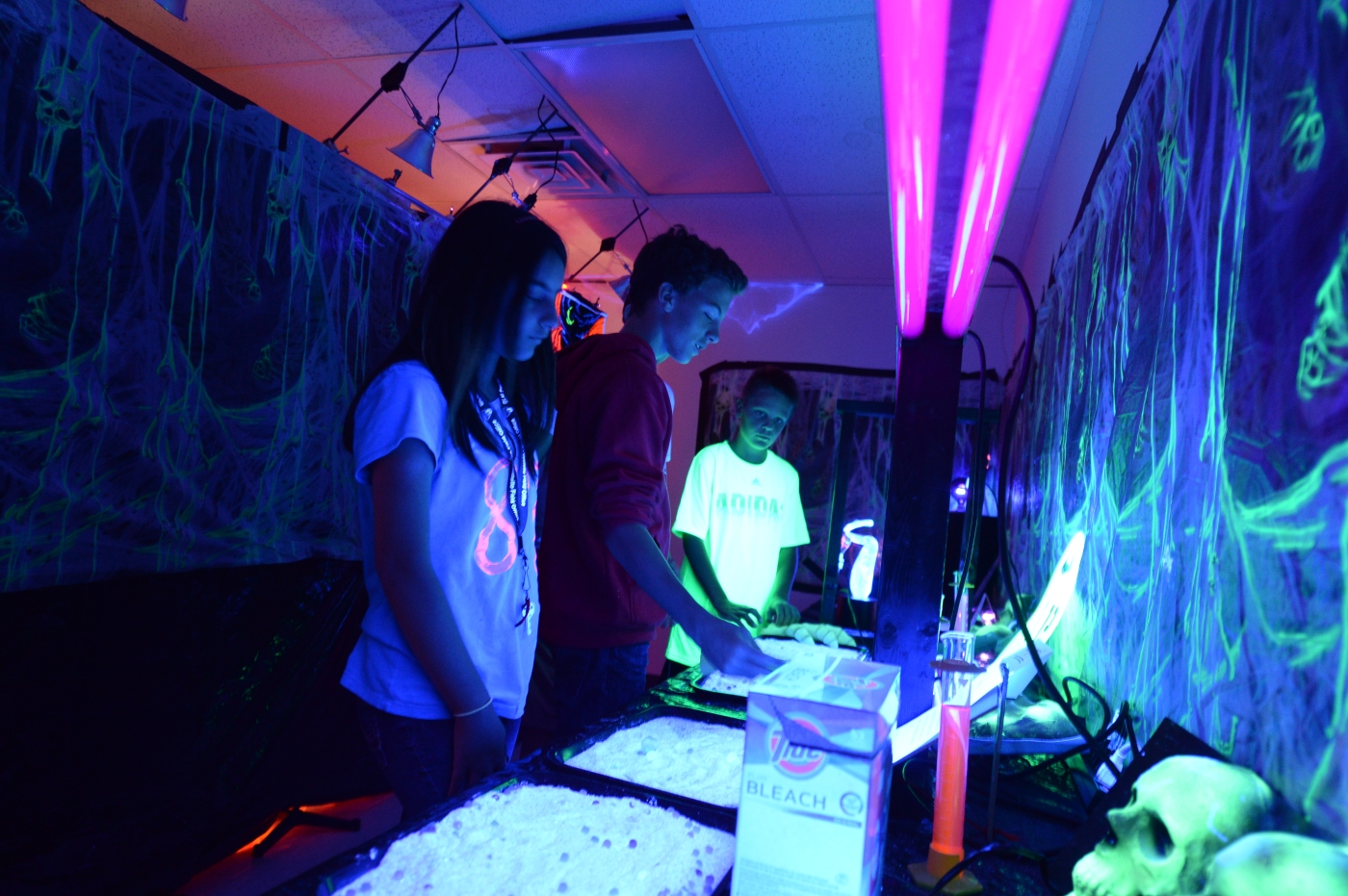 Visitors, beware! In this haunted Idaho laboratory, you may just learn a thing or two about science.

Story by Brett A. Halbleib
Photos by William Schaefer

One by one, grade school students walk up to the glass beaker full of clear water. Then they stick their hands inside. In the water, they see their hands but nothing else. Yet, they feel something—something they can’t see but feels a lot like . . . eyeballs!

The youngsters feel a twinge of fear (are those really eyeballs?) and a wave of fascination (why can’t I see them?), as college students and Kiwanis volunteers explain the science behind the illusion, called Ghost Eyeballs.

The “eyeballs” actually are a marble-sized polyacrylamide polymer—the same stuff used in diapers to absorb liquid.
The polymer refracts light the same way water does, meaning you can’t distinguish the polymer from the water.

Ghost Eyeballs is one of about 50 exhibits in the Haunted Science Lab, an event held every October by the Kiwanis Club of Pocatello, Idaho, and the Idaho State University Society of Physics Students. The lab is the brainchild of Kiwanian Steve L. Shropshire, a physics professor at Idaho State.

“The whole idea is to inspire and educate kids with science in a nontraditional and nonthreatening way,” says Shropshire, who designed and engineered most of the exhibits. “Let them play around with some cool stuff. Spark their curiosity, inspire them to learn a little bit more.”

Toning down the fright

Area schools make annual field trips to the lab, which opens for a week every year, enabling students to immerse themselves in cool stuff like electrostatics, lasers, phosphorescence, magnetism and, yes, smoke and mirrors. On Saturday, there are even hovercraft rides. It’s like Bill Nye nirvana.

Most of the exhibits, like Ghost Eyeballs, are hands-on. Shropshire adds a spooky twist to each, though he admits to trial and error in finding the right degree of fear. He cites the “Spooky Chair” exhibit as an example.

“Spooky Chair” uses glass and reflections to create an illusion, and it’s based on an established magic trick called Pepper’s Ghost. Shropshire built a maze out of wood and plastic sheets. As the very first group of students walked through the maze, they were warned, “Beware of the spooky chair ahead.” When they saw an empty chair at the end, the students were unimpressed. Until, suddenly, a ghoul (a person in a mask) magically appeared in the chair and lunged at them. Instead of going back through the maze, the screaming children “ran right through the walls,” Shropshire says. “We had to close the exhibit.”

But word quickly spread about how scary it was. So Shropshire quickly reconstructed the maze and brought a second group through—and the same thing happened: Terrified students again ran through the walls. Since then, “We’ve toned it way down,” Shropshire says.

Afterward, the students learn about what they just saw—in this case, they learn about reflections and how light behaves. Elsewhere, they might learn about the Magnus Effect and Bernoulli’s Principle when watching a levitating table-tennis ball.

The lab gets students “really excited about science,” says Norma Jordan, principal at Lillian Vallely School in Blackfoot, Idaho. “They can’t take their eyes off what’s happening. Dr. Shropshire sets it up so the students become curious. They see something that seems magical. Then he teaches them what’s actually happening. He teaches them the science behind it, making them understand there’s a scientific process involved.”

Jordan takes her entire school to the lab, and she says the younger children look forward to it from hearing older children talk about it. “I think it gets their little minds excited about science.”

Megan Bullock, a fourth-grade teacher at Lewis and Clark Elementary in Pocatello, says she likes how the lab “encourages hands-on learning. Kids get to touch it or feel it or see it or experience it. I think it creates a lasting memory.”

Bullock says she notices a difference even with children who sometimes struggle in class. “They get so excited about what they’re seeing and doing,” she says. “They’re really on task and learning.”

The lab attracts students of all ages, “all the way through high school,” Shropshire says. “There’s enough here for college students to learn a few things. We try to make it accessible for just about all ages.”

Descriptions for each exhibit are written at about a fifth-grade reading level.

Shropshire and the Physics Club had been doing the lab on their own for several years before the Pocatello Kiwanis Club got involved. Back then, the lab opened for just a couple of days. “We simply didn’t have the manpower.”

Kiwanians joined the fun about four years ago. The club sets up and runs some of the exhibits. Past President Ed Bowman says the club also contributes money to pay for student bus rides and materials to create the exhibits. “We are heavily involved and we love doing it,” Bowman says. “It’s a positive project.”

Shropshire says Kiwanians really help out during the week, when many of the students have class and are unavailable. “Kiwanis enables us to put this up for an entire week. It has increased by a factor of 10 the number of people we can reach.”

Though it’s grown, the lab still can’t meet demand, Shropshire says. “There are more schools that want to come to our lab than we have time available.”

The professor estimates about 1,000 children visited the lab in 2014. He’s hoping to keep it running even longer, and he might have the manpower to do it. The Bannock County, Pocatello, Idaho, Kiwanis Club has agreed to help out as well.

He also thinks the haunted lab is a great project for other clubs.

“This is easily reproducible,” says Shropshire. “And Kiwanis is all about helping kids. One way to help kids is to teach them.” 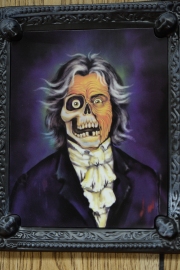 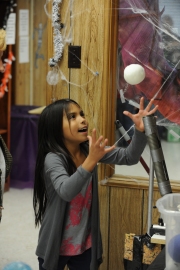 Photo by Bill Schaefer Con Jensen, left, a member of the Pocatello Kiwanis Club, demonstrates one of the air pressure experiments a student from Wilcox Elementary School.