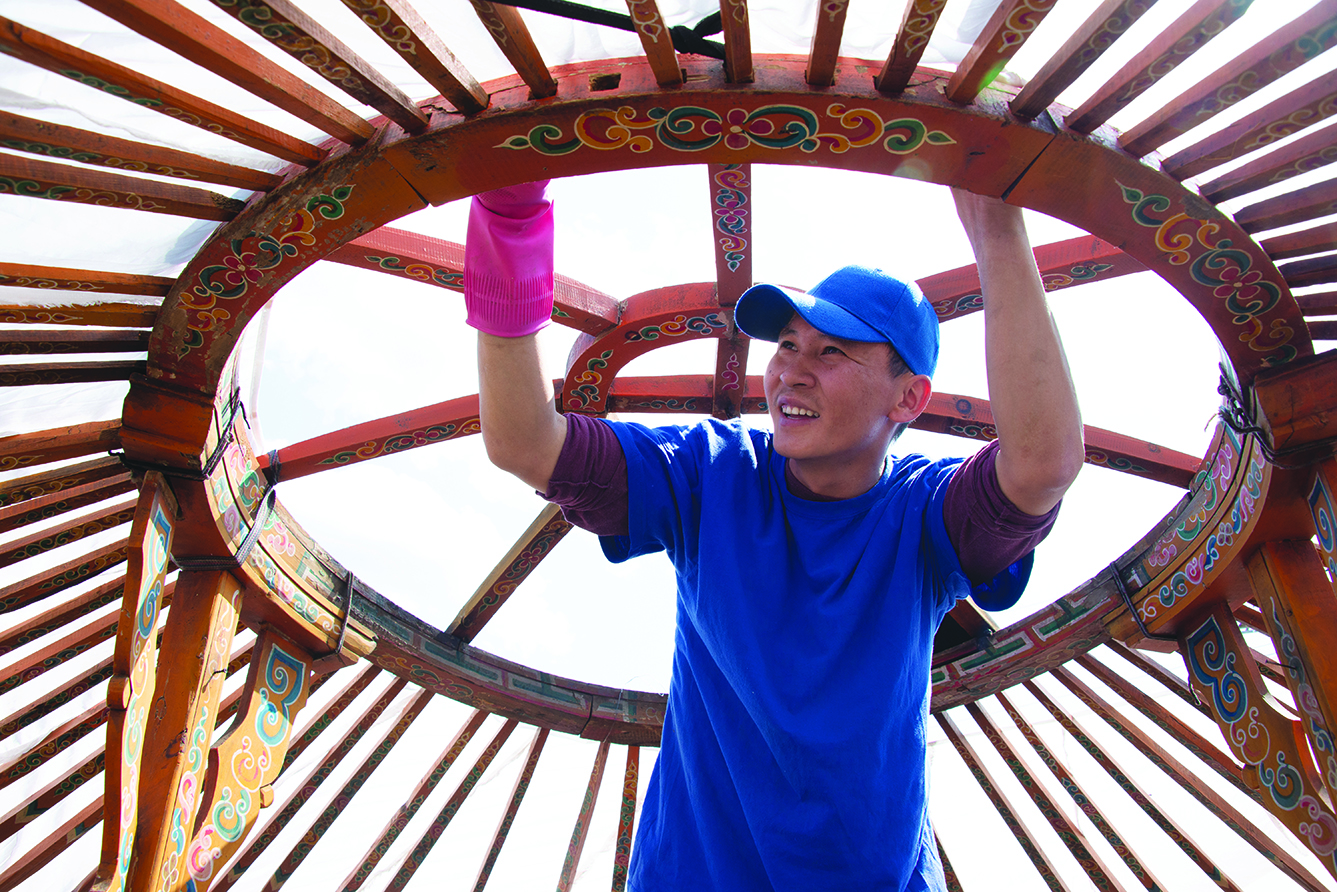 Mongolian educators are special in and out of the classroom.

Story and photos by Jack Brockley

On any ordinary day, students and teachers of School 55 may be howling, growling and meowing. Or they may be kneading bread or tending herbs and hostas. As principal of Mongolia’s largest school for children with mental disabilities, Ganbileg Chuluunbaatar encourages her staff to find creative ways to teach their students. So they practice animal sounds as part of speech therapy and learn life skills and careers by baking bread and gardening.

On any ordinary day, School 55’s staff is extraordinary, as most ordinary teachers are. Outside the classroom, several members of the faculty are members of the Kiwanis Club of Ulaanbaatar, seeking creative ways to serve their community. Using funds raised by selling theater tickets, for example, they have purchased clothing, toys, food and hygiene products for needy families.

And they have built a ger.

A ger is a predecessor of a yurt, a tent designed for nomadic people. The obvious difference between a ger and a yurt is that the latter uses curved poles as framework for both the roof and wall. A ger has a gently sloping roof with straight rafter poles that connect the crown to a lattice wall. 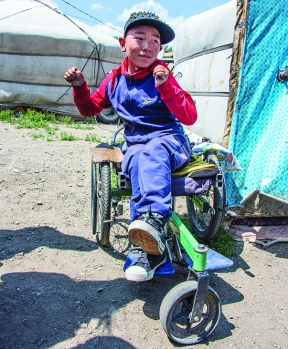 There are many gers in the 14th Microdistrict, a settlement area in the Bayanzürkh District of the nation’s capital. One of these gers is the home of a 69-year-old grandfather and his 13-year-old grandson, Tugsmandakh, who has cerebral palsy. For six years, the fabric-wrapped residence has been part of this densely populated community where coal-burning stoves contribute to heavy winter air pollution.

“Their ger leaks when it rains,” says Kiwanian Ochisuren Batmandakh. “It needs to be dismantled, cleaned and rebuilt.”

On a hot, dry, sunny day, a string of vehicles wanders through the settlement, stirring trails of brown dust. They turn at a shack made of discarded metal and make a sharp turn at a two-story cinder-block house with glass windows. Right turns and left turns, everywhere they go, they stir up trails of brown dust.

Pulling up to a fenced compound, the Kiwanians grab supplies — rags, soap, tools, buckets, tubs — and file through a gate. The grandson, Tugsmandakh, is there in a makeshift wheelchair and greets them with a broad smile. His toddler sister stares with furrowed eyebrows at the strangers, before straddling a tricycle and pedaling furiously to her nearby home. She’ll be back with another brother to watch them work.

One crew unties straps that secure the structure. Other Kiwanians step through the low doorway to move cots, refrigerator, rugs — nearly everything — outside for cleaning. Since there is no running water nearby, they make regular runs outside the compound to refill their fast-blackening tubs.

Within 15 minutes, the ger’s three layers of covering are lifted away from the framework: The outer, leaking canvas and the inner cotton wall are discarded. The middle layer of wool insulation is set aside for reuse. The framework of the ger is exposed:

The work continues. The uni are pulled from notches in the toono and untied from the khana.  A cleaning crew scrubs each uni, the toono and bagana, revealing blue, orange, white and red-swirling designs. They call other workers to view the once-hidden art.

Within an hour, workers reverse the process, securing the roof poles to the crown, adding a new inner sheet, which is covered with the wool insulation and a new orange outer canvas and cinched tightly with straps. Kiwanians carry clean furnishings inside, along with a new wheelchair, sunglasses, clothing and other gifts for the grandson, grandfather and their neighboring family.

After a hard day’s work at the ger, the Kiwanians have one more stop (above). One of the School 55 teachers had noticed that a student had not been attending class and learned that his grandmother could not afford medicines that controlled fainting episodes. She had to make a decision between the medicine and the care of the boy and two other grandchildren. The Kiwanians visited the home, bringing clothing, food, toys and medicine. As the volunteers dispersed toward their vehicles, their principal called them back. They gather in a broad circle. Looking at every face, Principal Chuluunbaatar commended their work.

“You have made a difference,” she said. “Kiwanis is about helping children, and that’s what we’ve done today. We will continue to help children wherever we find them in need.”